Lobbying Rep. Joyce Beatty to Co-sponsor the We the People Amendment

Sandy Bolzenius, Coordinator of the Central Ohio MTA affiliate, developed a creative, personal and powerful approach to request Rep. Joyce Beatty co-sponsor HJR 48, the We the People Amendment. In addition to working with others to set up a virtual meeting with Rep. Beatty or an aide, she produced and sent a packet to the Congresswoman. The packet contained a personal letter and booklet appealing to her interest in Frederick Douglass and in making the connections between the efforts of Douglass, Ida B. Wells and Rosa Parks to assert the morality and constitutionality of slaves being human persons, not property, with Move to Amend's efforts that corporations are property, not human beings, and can be defined by We the People. 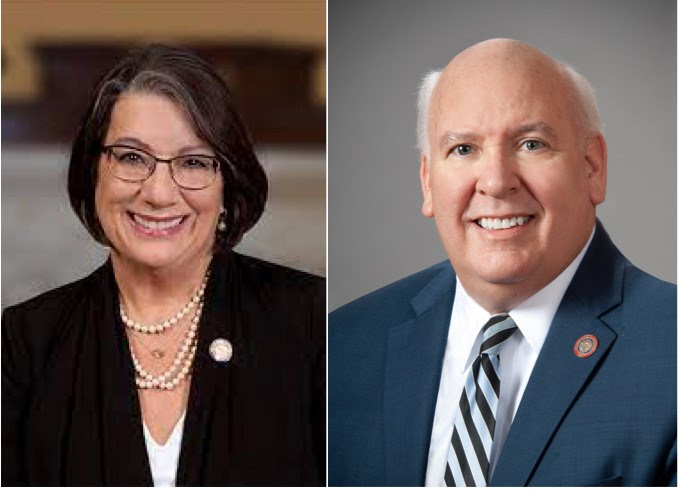 The biennial city-sponsored virtual public hearing for Mentor residents to speak on the impact of money in politics and its influence on our democracy and the role of corporations and other moneyed interests that play a part in the political process.

The hearing was mandated as part of a Mentor Move to Amend-led effort to pass a ballot initiative calling on the City to communicate to federal and state representatives that Mentor citizens want a Constitutional Amendment to end corporate personhood and money as free speech. The citizen-driven ballot initiative passed in 2014 by 70%.

There has been an ongoing tension in the history of the United States between legislative efforts to limit the influence of money and political power, and judicial rulings curbing Congress' power to do so. Particularly in the past 50 years, legislative efforts and Supreme Court rulings have made pivotal changes to the role that money plays in our democracy. Efforts to restrict the influence of money have been rolled back largely based on the misguided narrative that artificial entities are people and money is equivalent to speech protected by the First Amendment.

Public testimony began with the announcement that in November 2020, Painesville became the latest Ohio city to vote for a citizens’ initiative calling for a 28th amendment to the U.S. Constitution. The amendment they stipulate clearly states that corporate entities do not have the constitutional rights of human beings, and money, not being speech, can be regulated in political campaigns. In addition, the Painesville initiative establishes regular Democracy Day public hearings like the one here and in many other cities, for citizens to testify before their local officials about the need for the amendment. 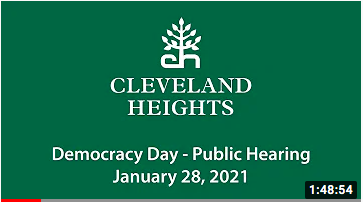 The annual meeting gives residents a chance to voice their opinion on money in politics and other pressing issues.

Eight years ago, voters in Cleveland Heights passed Issue 32, which declared support for a 28th Constitutional Amendment, which would say corporate entities are not people and do not have Constitutional rights. The passed legislation also said money does not qualify as speech and money spent on elections should be regulated.

We imagine everyone will be glad to put 2020 in the rearview mirror. The ugliness of presidential politics, police brutality, and the COVID-19 pandemic have touched us locally and roiled the nation. As we write, not only is President Trump still disputing the election, it appears that Ohio electric ratepayers will be charged an extra $7 per month for the foreseeable future, thanks to our General Assembly’s failure to repeal their utterly corrupt creation, House Bill 6. These are failures, not of democracy, but of governments that serve the power of money, rather than the public interest.

There will be plenty for citizens to address at Cleveland Heights’ eighth annual Democracy Day on Thursday, Jan. 28, at 7 p.m. For the first time, the public hearing will be virtual, livestreamed on YouTube. Whether as an audience member or a participant, please plan to attend. Do you have something to say about the corrosive effect of corporate power and big money on our democracy? You can speak for up to five minutes (about 500 words). Send your full name, e-mail address, and topic to Carla at [email protected] by Tuesday, Jan. 26, to receive a participants’ link. The link will also be posted on the city calendar.