Move to Amend Volunteer Since 2014

Will you join me in recruiting our Congress member to co-sponsor the #WeThePeople Amendment?

I support Move to Amend because it addresses a root cause of so many problems—the excessive influence of big money and corporate power in the halls of government. In addition to volunteering, I support MTA with a monthly donation. You can help by donating today. Thank you.

Move to Amend seeks a 28th Amendment to the U.S. Constitution that makes clear constitutional rights belong to human beings only—not corporate entities—and money spent on elections is not protected speech and shall be regulated.

I've been involved with MTA since 2014. An interest in economic justice and peace prompted me to join the Greater Dayton MTA affiliate. I want to see people thrive and prosper, and that takes living wages and safe communities. What I learned after getting involved with MTA is that large corporations influence policies that allow them to profit from low-wage workers and from war. 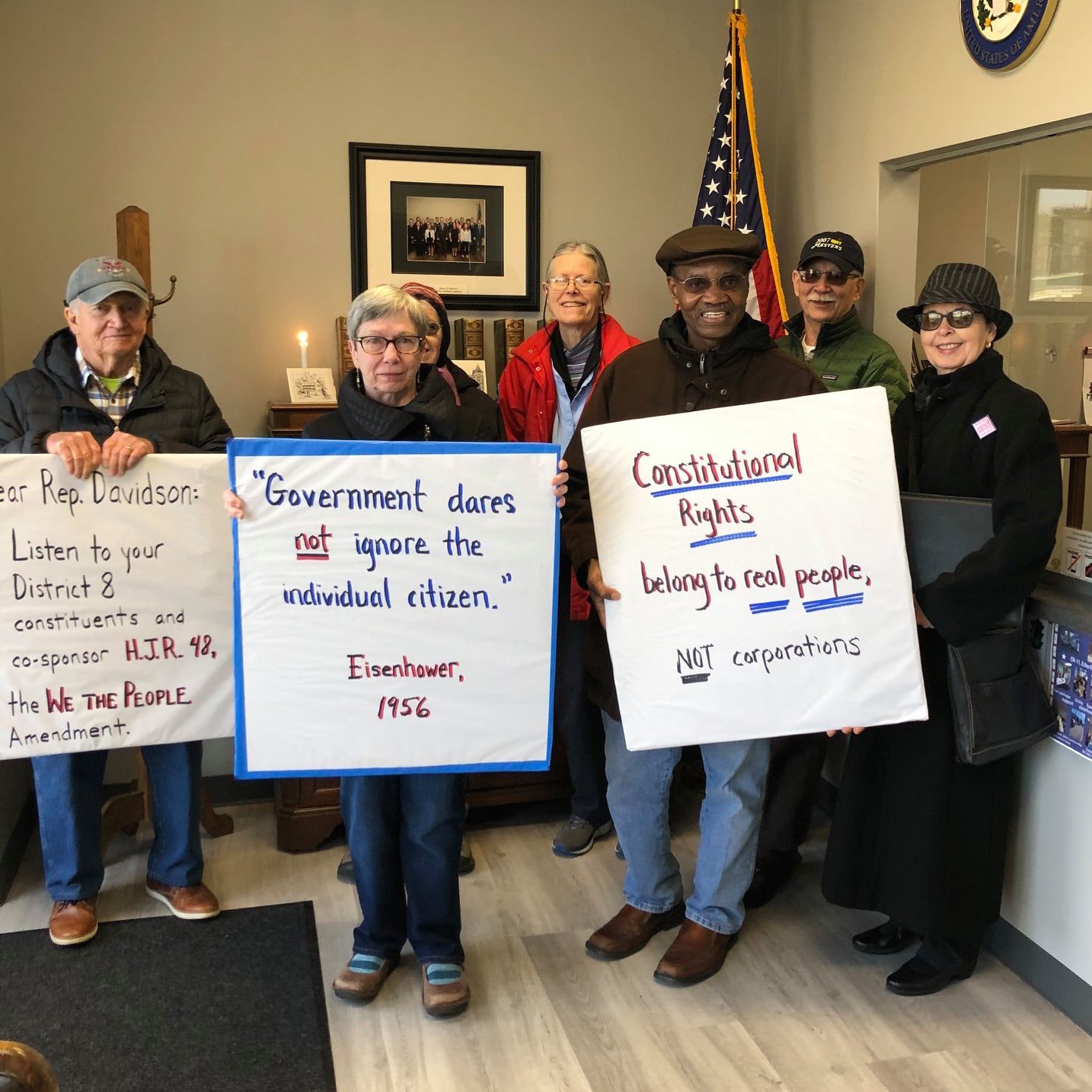 Whatever our cause—economic justice, racial justice, environmental justice—you can pretty much bet that big money and corporate power get in the way of solving the problems we're trying to solve. It's not just that the ultrawealthy and large corporations have the money to bankroll the campaigns of politicians who will return the favor. It's also about so-called "constitutional rights" that the U.S. Supreme Court has granted to corporations over the course of many, many years.

I'm not against corporations. They play an important role in society and should be protected from government overreach. But they are state-chartered entities, not human beings. They warrant statutory protections, but they should never be on equal footing with you and me—and they sure shouldn't have greater power over you and me than we have over them. Early in our nation's history (and in Ohio's history), people had sovereignty over corporations. But today, corporations have sovereignty over people because the Supreme Court has given them not only 1st Amendment rights, but also 4th, 5th and even 14th Amendment rights. Without a constitutional amendment that makes clear corporations are not people with constitutional rights, the Supreme Court may very well continue to rule in favor of corporations when they raise objections to legislation designed to remove injustices.

Another reason I support MTA is its emphasis on solidarity organizing, that is, standing with groups that have been marginalized or oppressed and working together to move our nation in the direction of an authentic democracy, one that values human rights and gives voice to those who have gone unheard for far too long.

I continue to volunteer with Greater Dayton MTA, and I'm also active in an ad hoc working group called We The People Miami County, based in Troy, Ohio.

I hope you will join me in supporting MTA by making a donation today. Thank you.