As one of the largest untapped copper deposits in North America, Oak Flat lies prey to transnational mining corporations Rio Tinto and BHP-Billiton, who, by playing by the rules–i.e. the laws that they help set as wealthy corporate persons exercising their constitutional rights–are legally taking this sacred site and Federally protected land.

The copper mine proposed by Rio Tinto and BHP-Billiton through their joint subsidiary, Resolution Copper Mining LLC, would be among the largest mines in the U.S. producing 40 billion pounds of copper over 40 years, by excavating an ore body 7,000 feet underground. The extraction process will cause a sinkhole two miles wide. Oak flat would be destroyed.

"...a recent survey found that 74% of likely Arizona voters do not approve of the mine. That news joined the release of a new report that revealed the mine would use enough water to supply a city of 140,000 annually for its estimated life." (See: www.azcentral.com) 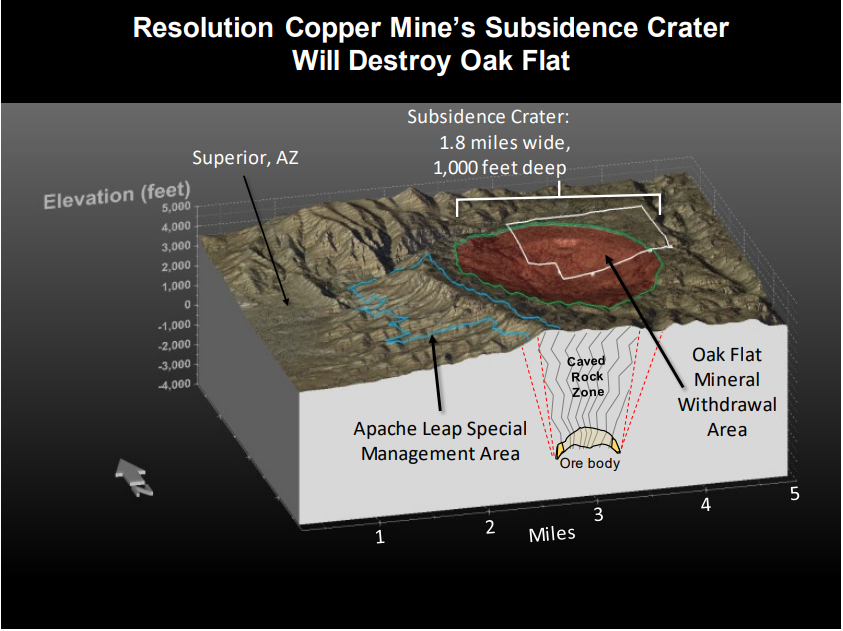 How did this happen?

In 2014, after failing to get the land exchange passed as a stand-alone bill five times, Sen. McCain attached a rider bill to the National Defense Authorization Act, handing Oak Flat over to the multinational mining corporations. As you could guess…McCain was perennially the top Congressional recipient of Rio Tinto campaign contributions (see OpenSecrets.org). President Obama quickly signed the Act into law, and authorized the federal government to transfer approximately 2,400 acres at Oak Flat to Resolution Copper in exchange for about 5,300 acres scattered in other parts of the state.

This sacred land is being transferred into private for-profit control and will be exempt from federal laws protecting religiously, culturally, anthropologically and environmentally significant sites. An environmental study was mandated and is currently being conducted, but, regardless of the study's result, Resolution Copper will take possession and mine the site at its discretion…

How did it get this far?

Corporations are considered human beings under the U.S. Constitution and use those rights against people and the planet.

This land exchange is the result of unbridled corporate rule. Congresspeople and governmental bodies bowing down to industry monsters with bloody records, because that is the almighty precedent. The only way to reign in corporate power is to address it systemically by abolishing ALL corporate constitutional rights and money as First Amendment free speech. Until we make the statement, "corporations are not people, and money is not speech" legally true, we all lay prey to profiteers taking away history, culture, health of air and water, and all which is wild and natural.

➢ To learn more about the relationship between corporate power and environmental catastrophe and how protection of the earth is inextricably tied to ending corporate rule, join the discussion “Abolishing Corporate Planetary Destruction”  Online, Thursday 4/21/2022 at 5 pm PT/ 8 pm ET HERE.

Find out more about Oak Flat:

➢*See The Spiritual Connection of Indigenous Women to the Land and its Crucial Role in the Apache’s Battle for Sovereignty, Zinaida Carroll, NIWRC)

PS: Share this with family and friends! And, if you have not sign our petition, please do so at https://www.movetoamend.org/motion