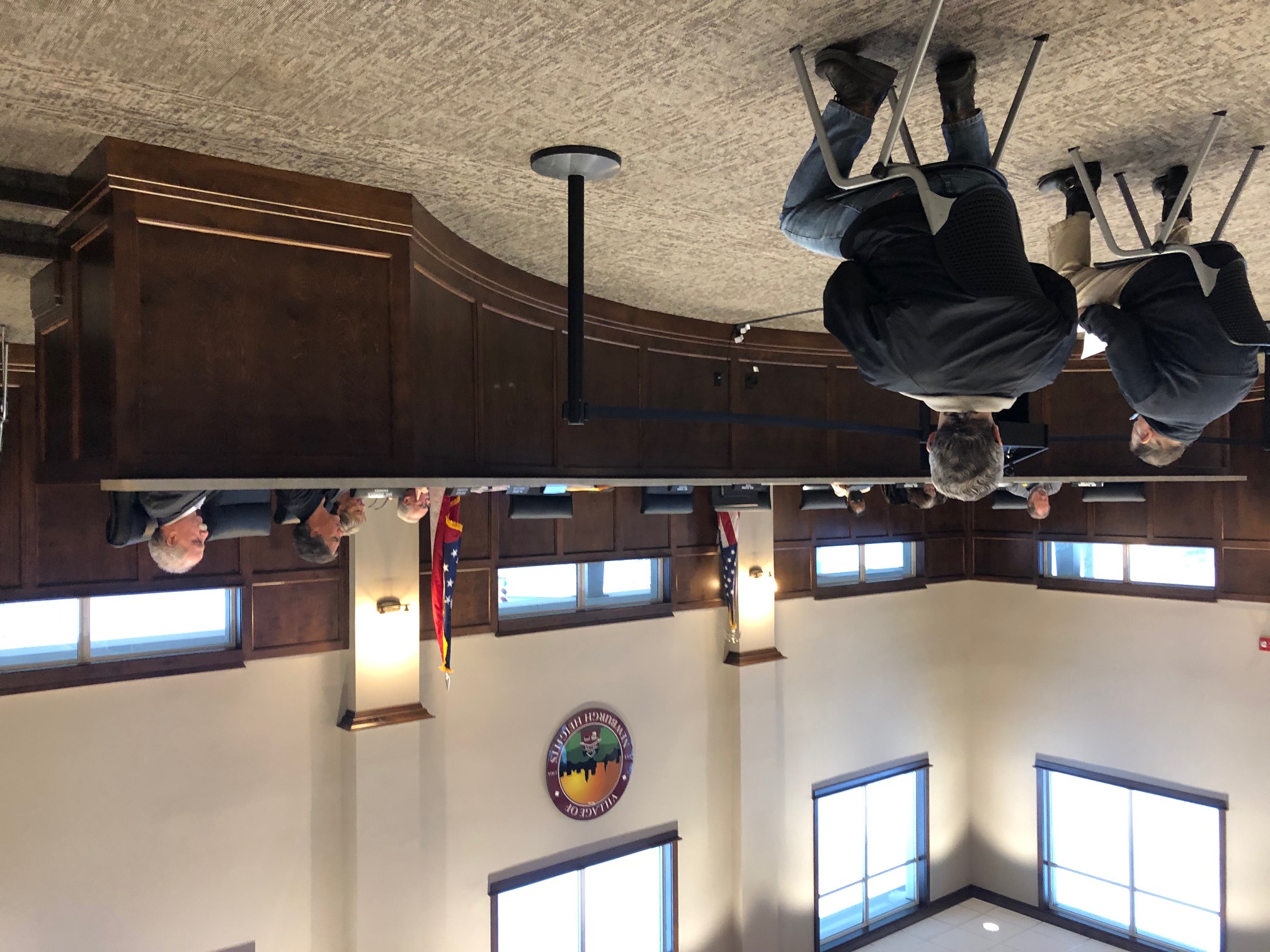 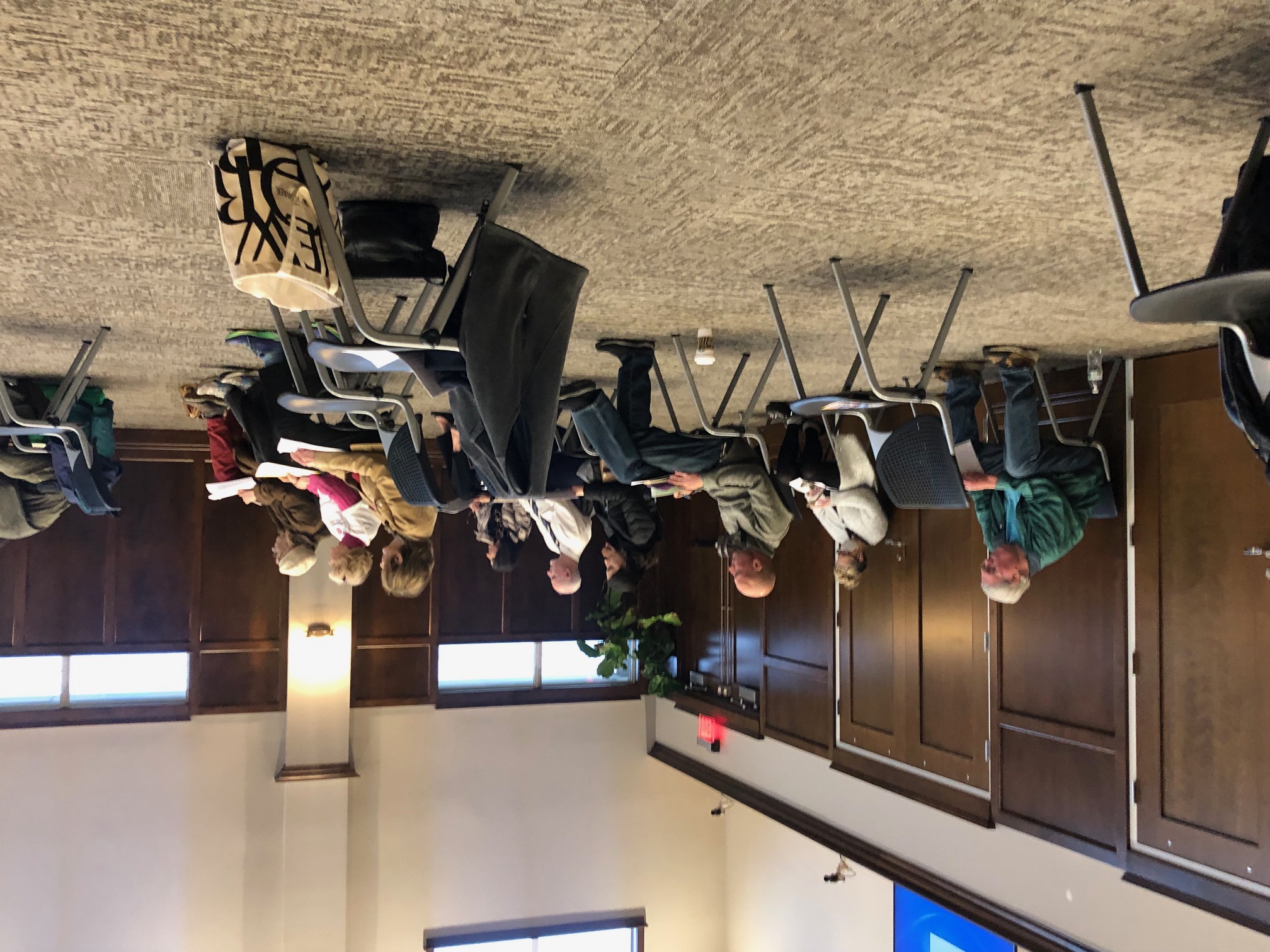 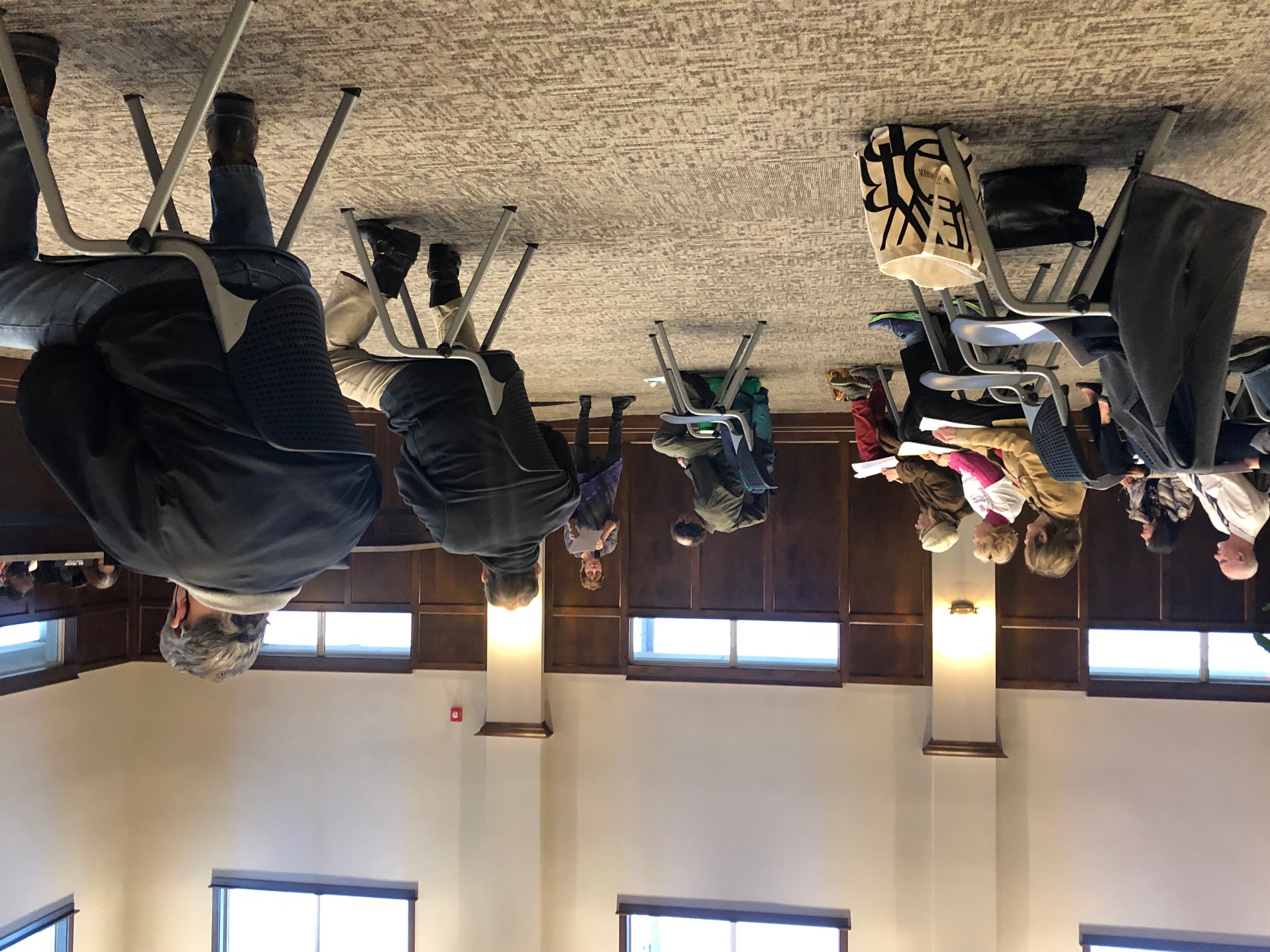 Good evening. It’s a privilege to be here in Newburgh Heights for your 2022 Democracy Day public hearing. Thank you, Councilwoman Traore, City Council members and Mayor Elkins, for inviting members of Cleveland area Move to Amend chapters to attend tonight.

As some of you know, but others may not, the Supreme Court’s Citizens United decision of 2010 led to a national movement to take back the U.S. Constitution after it was usurped by the twin demons of corporate personhood and money being considered free speech. The national, non-partisan organization leading that movement is called Move to Amend. We have proposed, and convinced Congress members to co-sponsor, House Joint Resolution 48, which supports the We The People amendment to the U.S. Constitution. It essentially states that 1. Corporate entities are not people and therefore cannot have constitutional rights and 2. Money does not equal free speech. This message resonates with citizens across political boundaries and across the country.

Newburgh Heights joined this movement early on. In 2012, Brecksville and Newburgh Heights were the first two cities in Ohio whose citizens voted for ballot issues declaring support for such a constitutional amendment! The issue you and your fellow Newburgh Heights citizens passed—by a 73% yes vote! – is an ordinance declaring support for the We the People Amendment. It also established regular public hearings like this one, informally called Democracy Days, at which citizens can testify to the harms caused by corporations having never-intended constitutional rights, and by money being considered free speech.

As trend-setters, you should be very proud because since then, Ohio voters have passed ballot initiatives similar to yours in:

Defiance and Cleveland Heights, in 2013

Toledo, South Euclid and Shaker Heights, all in 2016

In 2016, the City of Cleveland passed an ordinance supporting the We the People Amendment and establishing biannual Democracy Days for 10 years. In addition, 12 Ohio city governments have passed resolutions calling on Congress to introduce the We the People Amendment. Because of all this support in her Congressional district, we were able to persuade Rep. Marcia Fudge to co-sponsor HJR-48 in the 116th and 117th Congresses. We are lobbying Rep. Shontel Brown to follow in her mentor’s footsteps and do the same. 90 co-sponsors have now joined the lead sponsor, Rep. Pramila Jayapal of Washington state.

Meanwhile, we are wondering: how can First Energy be allowed to stay in business after it paid $60 million to Ohio legislators to directly defraud all of us – Ohio taxpayers? You might think the Ohio Constitution offers no remedy for this, but it specifically provides for revoking the charter of a corporation that acts beyond its authority. Bribery and money laundering certainly qualify. So Ohio Move to Amend is asking CAN WE PULL THE PLUG ON FIRST ENERGY? We will hold a virtual forum on this topic on Saturday, May 14 at 10:00 a.m. in order to explore:

We’ll pass around a sign-up sheet for those who would like more information about this, and/or our other activities.

You may have heard various politicians talk about passing legislation to deal with corporate power or money in politics. That won’t do it. Any laws attempting fundamental reform of the U.S. political system can and will be ruled unconstitutional. The Supreme Court precedents began way before Citizens United in 2010 and in fact date back to 1886!

Only passing a constitutional amendment like U.S. HJR-48 will allow us to reclaim our government from the control of multi-national corporations and wealthy individuals.

Now, my colleague David Berenson and I would like to share a little 5-minute skit about corporate personhood we hope you will enjoy. 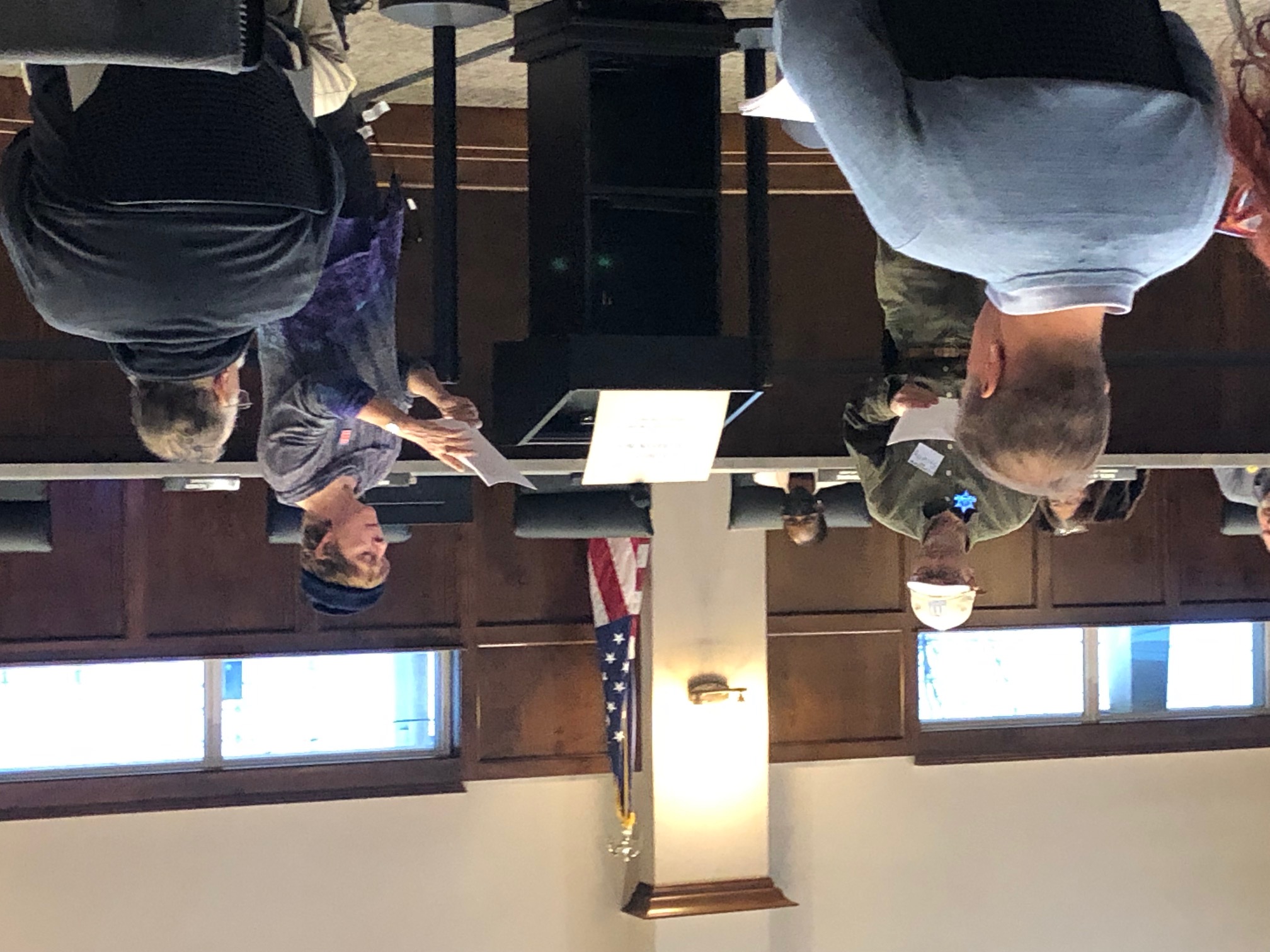 Is the Corporation a Real Person?

Read on April 5, 2022 by David Berenson and Carla Rautenberg of Cleveland East Move to Amend

A woman looks up at the great glass building and enters.  There is a security guard nearby. She enters the building and walks up to the SECURITY GUARD.

SECURITY GUARD “Hello, how may I help you?”

WOMAN I’m here to see someone.”

SECURITY GUARD   Okay, Do you have an appointment?

SECURITY GUARD   You can’t really do that. HE’s not in.

WOMAN Oh, is he doing something exciting like out campaigning for president?

WOMAN  Oh, he must not be a natural born citizen. The Constitution says. . . . .

SECURITY GUARD     I don’t care what the Constitution says. He isn’t running for office.

WOMAN: I wonder if the corporation person can even vote. Do you know if HE votes?

SECURITY GUARD: I'm not at liberty to say. Why do you ask?

WOMAN: Well, one thing I wanted to ask it, uh, I mean, HIM, was about those fancy new voting machines. Do you know that you can't even tell if your choice is what gets voted? That's so scary, isn't it?

SECURITY GUARD: Yeah that is scary... Um, I mean I'm not at liberty to say what I think.

WOMAN    Is HE out to lunch? I know people take lunch at all different times these days.

WOMAN  I bet he’s not in yet. A little hung over from last night, right?

WOMAN    I like that. He is a teetotaler like me. He must be a good worker.  Is he possibly on vacation with his family?

WOMAN   No vacations? He works so hard.  I must not be too critical of this guy.   (pause) Maybe he is sick.

WOMAN: I wonder if the Corporation ever dies. It makes me wonder if there's even a death penalty in this state for such a thing.

SECURITY GUARD: I've only worked here for 10 months, so I don't know about corporations dying. Hmmm... good question about the death penalty though.

WOMAN  Wow, he probably has a great health plan. Not like so many other people in this country. Maybe his family is sick.

SECURITY GUARD    He doesn’t have a family…

WOMAN  Doesn’t have a family? Not even a wife or children?

SECURITY GUARD (growing agitated) Listen. If you want to talk to the corporation you can email your questions to the customer service address on the company’s website.

WOMAN  Now listen here.  I DEMAND  to talk to the corporation.  I know this person has a voice I want to hear it! Since the Supreme Court unleashed the corporation’s voice do you possibly have a recording of the voice?

SECURITY GUARD  Please leave.  If you persist I’m going to have to throw you out of here.

WOMAN: Say, you and the corporation haven’t been footsying around have you?

WOMAN  Come on now.   If the Corporation has the free speech to fund campaigns and contribute to politicians, then why can’t he talk to ME?

SECURITY GUARD   Its time to leave lady. (Reaches but doesn't grab her)

WOMAN: What if I make a contribution?

SECURITY GUARD: How BIG a contribution?

WOMAN: Ah. So there's a specific price, eh? I knew it!

SECURITY GUARD: Nevermind. Forget I said that. You're outta here, now! (He grabs her???)

WOMAN:   I just want to talk to the corporation!

SECURITY GUARD:  Listen (As she tries to get a word in edgewise) if you want to hear the voice of the corporation just turn on your radio, just read a paper or watch TV. Call your congress  members.  If you want to hear its voice look at policies for health care, war budgets, The War on Crime!!. Pay attention to the media.  But its time to get OUTTA HERE.

WOMAN: Get your hands off of ME! You haven’t heard the last of me yet. My friends and I are mounting a campaign to take back our democracy and stop Corporate Personhood.

And right away it gets complicated. In his opening oral argument in 1886, Supreme Court Chief Justice Morrison Waite, stated the Supreme Court considered the 14th amendment applied to corporations. But, because a clerk inserted his words in the headnotes of the case--which are not part of the Courts official opinion—but only a summary of a point of law, they never were intended to be a precedent setting statement. Because the headnotes are not part of the Court’s official opinion--they falsely and only accidentally became accepted as a precedent and began to be used to defend constitutional rights for corporations.

Ricks, Thomas, First Principles – What America’s Founders Learned from the Greeks and Romans and How that Shaped our Country, Harper, 2020, 185-187.

Charter Schools are Corporations….. They often make a handsome profit for their owners.

Charter schools are designed as a business model.

The originators of Charters are  rich entrepreneurs…such as:…

—The Walton Family….of the Wal-Mart fortune

—Reed Hastings of Net Flix… & many others whose goals, are to end public schools entirely.   Why?...

They  don’t like what is public…they think  it is inefficient…&  .they absolutely hate unions.

You’ve been hearing a lot about that on the news recently, because the Amazon workers on Staten Island New York,   voted  to Unionize., which is a major victory…especially   since that attempt recently  lost in the South.

Charters Schools are designed as a business model…And here is the worse thing about Charters:...

Public schools are a DEMOCRACY model…...also paid for by tax payers, but not where a profit is the goal.

Where all children are welcomed!  Where  a SCHOOL BOARD is ELECTED….from people who live in that community & know what the school needs.

Let’s continue the DEMOCRACY model…. And end the business model.