Check here for all the local news about corporate rule, Move to Amend press coverage, and announcements from our grassroots leaders in Iowa! 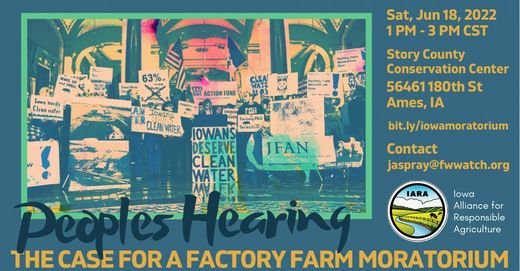 How did Iowa come to be so burdened with CAFOs? What do special interest money in our political process, and constitutional rights for corporations, have to do with the situation we find ourselves in today?

A report by the Environment Iowa Research & Policy Center in 2011 included an analysis of agribusiness campaign contributions and lobbying expenditures. The findings included:

More recently, Iowa, Gov. Kim Reynolds, who has received $300,000 in campaign contributions from Iowa Select, fought to keep meat packing plants open during the COVID pandemic, prioritizing agribusiness CAFO operators like Jeff Hansen and Iowa Select, who would lose millions if their CAFOs became overloaded with market-ready animals. At a 2019 gala for the Deb and Jeff Hansen Foundation, Republican Iowa Gov. Kim Reynolds contributed an afternoon’s tour of the capitol and governor’s mansion, led by Reynolds herself. Iowa Select requested her presence at the 2019 gala the day after Reynolds won her election — likely aided by the Hansens’ six-figure campaign contribution.

AMES, IA — On Saturday, farmers, experts, advocates and legislators gathered at the Ames Public Library for a people’s hearing on the urgent need for a factory farm moratorium in Iowa. The event came on the heels of yet another legislative session without action in Des Moines on the state’s factory farm crisis, and one month after the release of a new Food & Water Watch report, “The Hog Bosses,” detailing the agricultural consolidation crisis in Iowa farm country.

Absent legislative action on the issue, advocates from the Iowa Alliance for Responsible Agriculture, a coalition of more than 25 organizations united against factory farming in Iowa, hosted the two-hour people’s hearing to present constituent demands and expert perspectives on the necessity of a factory farm moratorium in Iowa. Hours of testimony reflected the diverse criticisms of the industrial factory farming model, and highlighted local impacts on the lives of Iowans from all corners of the state. Topics discussed included water quality, public health, market consolidation, and the impacts factory farms have on community members’ quality of life and on farmers’ ability to make a living.

“The factory farm system is crushing Iowa. For decades, Iowans have seen independent family farms forced into bad contracts with corporate giants in order to survive, small businesses shutter their doors, and our waterways and drinking water devastated by this model of industrial agriculture.

“Today, community members, farmers, and experts from all across Iowa came together to bear witness to the tremendous suffering our people, state, and environment are undergoing at the hands of corporate agribusiness and their legislative enablers. Our hearing underlined the criticisms of a model that many of our legislators have been too weak to confront.

“Iowa legislators must listen to us, their constituents, as we state loud and clear that it is high time to put an end to factory farms’ relentless growth in our state. We must pass a factory farm moratorium in Iowa and our federal representatives must pass the Farm System Reform Act.”

A full quote list from event participants is below. A recording of the event is available here.