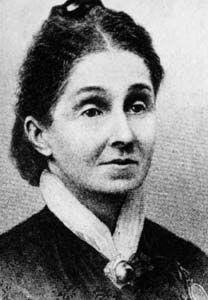 Just fourteen years later, a corporation won "equal protection" under the 14th Amendment [Santa Clara County vs Southern Pacific Railroad, 1886] -- the very first case of the Supreme Court recognizing the corporation as a "person" with constitutional rights -- ushering in the era of rapidly accelerating corporate rule that has now fully entrenched our system. Help us accelerate the movement to END this illegitimate doctrine by sharing the petition and growing the movement for the #WeThePeopleAmendment.

Since corporations became "people", they have invoked and benefitted from the 14th Amendment more than any group of human beings, for whom the amendment was intended.

Once their personhood was settled case law, it also led to their claims of "rights" under the 1st, 4th, 5th and 8th amendments -- ALWAYS at the detriment of the rights of individuals, workers, communities, and the natural world.

The ONLY solution is to abolish all corporate constitutional rights.

Virginia L. Minor was not alive to see women finally win suffrage, when the 19th Amendment finally passed in 1919. But her story (and all stories of people's movements in the U.S.) is fascinating in parallel to the trajectory of corporations -- which seemingly gained their rights effortlessly. It didn't take decades of organizing, sacrifice, and putting their bodies on the line. It only took money, power and connections.

Today is our monthly day of action (the 28th) but since it's Sunday, we will send our call to action tomorrow -- keep an eye out for that!

And let's keep growing our movement so we can see the #WeThePeopleAmendment pass in our lifetimes!