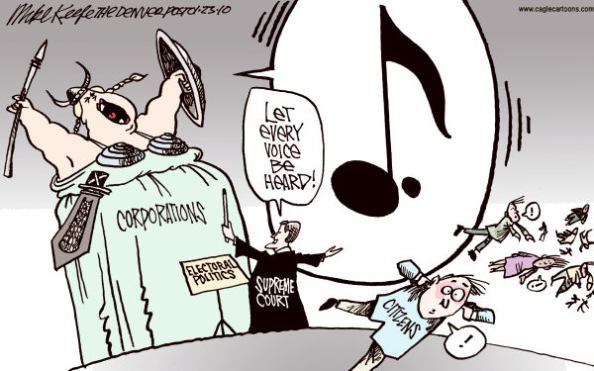 Forty-five years ago today, the Supreme Court ruled in Buckley v. Valeo (1976) that restrictions on campaign spending were a violation of the First Amendment of the U.S. Constitution.

They really said that MONEY, which is PROPERTY, is the same as FREE SPEECH.

Most of us learned about the absurd Supreme Court doctrines of "money = speech" and "corporations are people" in 2010, when the Citizens United ruling came down.

But the Buckley v. Valeo (1976) case that set the "money = speech" precedent was not about corporations -- it was about one individual's belief that campaign finance laws were a violation of his first amendment rights to express himself.

It's important to understand that these two ridiculous doctrines existed long before Citizens United.

Citizens United is a symptom -- it is not the disease.

The Citizens United v. FEC (2010) ruling essentially married them -- further crystallizing into the case law of the highest court in the land that BECAUSE corporations are people, and BECAUSE money is free speech, then any restrictions on campaign spending is a violation of their constitutional rights.

Citizens United is a symptom -- it is not the disease. The ruling was the expected culmination of Supreme Court rulings going all the way back to Santa Clara County vs. Southern Pacific Railroad (1886) -- the first SCOTUS ruling that gave corporations standing in the U.S. Constitution.

Which is why we must not only overturn Citizens United, but BOTH of the illegitimate doctrines that made it possible to begin with. The #WeThePeopleAmendment does just that.

Check out our Move the 117th Congress to Amend campaign to find out how you can help advance the #WeThePeopleAmendment in this new congress!

P.S. The #WeThePeopleAmendment is the ONLY amendment that overturns BOTH doctrines of "money = speech" and "corporations are people" -- check out our campaign to get 100 cosponsors by March 31. And if you can't give time, please help fund this work by making a generous donation today!