The Bill of Rights are NOT corporate rights

The Bill of Rights, the first ten amendments to the U.S. Constitution, was ratified today in 1791. It is perhaps the constitution’s broadest and most famous and honored portion, particularly the First Amendment. 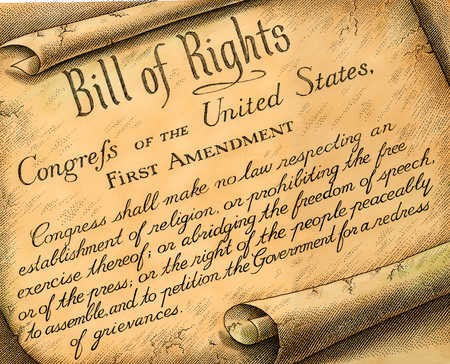 It wasn’t, however, part of the original signed Constitution. The list of specific guarantees of personal freedoms and rights was added only after people in several states organized opposition to the original Constitution without the accountability, protections and freedom of the provision of individual rights.

Supporters of inclusion of a bill of rights wrote articles, published pamphlets and pressured representatives in state ratification conventions to oppose the original Constitution. This "rabble" forced the new Congress to adopt a list of protections and rights that were based on those existing elsewhere that were sent to the states for ratification, most of which became the Constitution’s first ten amendments.

Unfortunately, the ratified Bill of Rights excluded numerous fundamental rights and powers for people of color, women and many others. Those that have since been added are exclusively due to the successful social movements led by individuals from those constituencies.

Movements for basic dignity, respect, justice and power for individuals and groups that have been historically oppressed continue to this day.

The constitutional limitations of democracy are not only the result of what’s in the Constitution. They’re a result to how the Constitution has been interpreted. The Supreme Court has granted constitutional “rights” that shouldn’t exist: the “right” of political money in elections defined as free speech and multiple “rights” for corporate entities to function as a “person” -- which together have corrupted the political process and preempted our ability to make decisions to improve our lives, families, communities and ensure a livable world.

Like those at the grassroots who refused to accept a Constitution without what became the Bill of Rights, Move to Amend refuses to accept Supreme Court decisions that have constitutionally sanctioned the bizarre concepts that “money equals free speech” – which is property, not speech – and “a corporation is a person“– which is simply a legal creation of government that should be publicly defined.

The Bill of Rights and other constitutional amendments were intended solely for human beings, not corporate entities.

We are committed to working for as long as it takes to pass HJR48, the We the People Amendment - which has attracted 95 Congressional supporters (our most ever), over 700 endorsing organizations (our most ever) and over 700 communities and states that have passed resolutions and ballot initiatives affirming that money is not speech and a corporation is not a person (our most ever).

Help Jointly Raise $48,000 so we can continue to promote H.J.R. 48 in the next Congress beginning next month!

We can only continue this defining, fundamental work, with your financial support. It’s the only way for us to keep our commitment to remain economically and politically accountable to the grassroots – independent from the influence that comes from being financially reliant on governments, political parties, cryto millionaires/billionaires, corporations, and large foundations.

Please contribute to our match fund of $48,000. Every dollar you contribute will be matched up to that amount through December 31.

DOUBLE YOUR END OF YEAR DONATION

Thank you for your ongoing support in every way for fundamental top-down change that focuses on building a democracy movement from the bottom up.