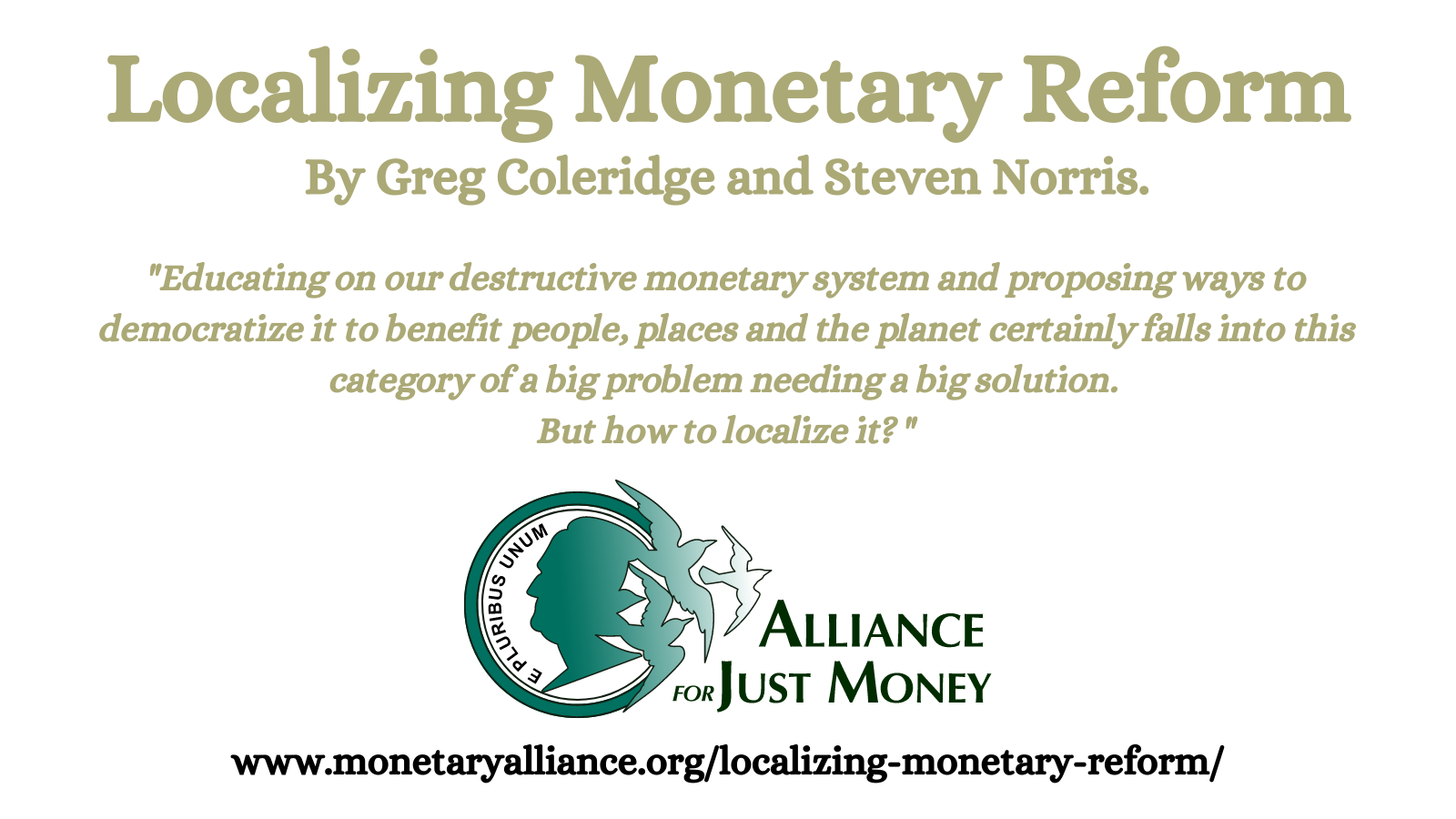 How can big-national issues like monetary reform connect with local individuals and officials?
Learn how Move to Amend got people to not only think and talk about ending “money as speech” and corporate rule via the #WeThePeopleAmendment, but to take meaningful action.

By Greg Coleridge and Steven Norris.

Organizing for any solution to a national problem presents multiple challenges, among them is to make the proposed solution relevant locally to people’s lives.

Bigger problems require proportionally bigger solutions, but those solutions can be difficult for individuals to relate to unless there are tangible ways presented to both understand the problem and solution and to take actions to bring change.

Educating on our destructive monetary system and proposing ways to democratize it to benefit people, places and the planet certainly falls into this category of a big problem needing a big solution. But how to localize it?

There are multiple strategies available to monetary reformers. One strategy is to study an approach of Move to Amend (MTA), a national group addressing the problems of big money corrupting elections and corporations increasingly dominating our lives by organizing to pass a Constitutional Amendment that would abolish the legal doctrines of “political money equals free speech” and corporate constitutional rights (i.e. “corporate personhood” for shorthand).

Like authentic monetary reform, ending “money as speech” and corporate rule via a Constitutional Amendment is a massive national solution. It’s a challenge to connect the proposal to local individuals and public officials. It’s also tough to find local educational and organizing “hooks” to get people to not only think and talk about it, but to take meaningful action.

MTA organizers in Ohio came up with the idea of organizing legal initiative petition campaigns to place on local ballots. Voters were asked whether they support Congress passing the proposed Amendment affirming that corporations do not have constitutional rights and money is not free speech, in the spirit of the national MTA We the People Amendment.

Anyone who’s ever been involved in local initiative petition campaigns knows that they are terrific ways to educate, organize and develop local leadership. Gathering signatures involved training petitioners, who were grounded in talking points and in how to approach individuals.  Soliciting signatures educated potential voters. Once the campaigns were successful in gaining ballot access, the campaign flips to educate the entire community to vote in favor of the initiative — which, in many cases, gained media attention and invitations to speak at voter education forums.

While people-driven initiative campaigns at the local level on all kinds of issues are common, an additional feature of the Move to Amend initiatives was very unique in the 12 Ohio communities where the initiatives were enacted and became law.

That feature was the legal mandate that the local government (i.e. city or village) sponsor, publicize and have representatives at an annual or biennial public hearing where residents and, in some instances, others could testify on the impact of money in politics and corporate rule on their lives, community, state, nation or world. While details varied on several features, all 12 communities have been holding these public hearings — some since 2012.

The public hearings have been significant in keeping the problems of money in elections and corporate rule, as well as the We the People Amendment, alive beyond the original local ballot campaign in several ways:

First, the public hearings provide an opportunity for local MTA organizers to recruit representatives from other groups working on solutions to problems that are thwarted by money spent in elections by special interests and corporate constitutional rights. This helps those representatives, whether physically in person or virtually together at the hearing, see the connections between their concerns and the need to pass the We the People Amendment.

Second, the public hearings are a means to continually educate local MTA supporters and expose the larger community to both the problems and the solution promoted by MTA. The exposure is all the more effective if the hearings are publicized in the media beforehand and/or reported on afterwards.

Third, the hearings are a chance to directly educate local public officials who attend the hearings, who are both testified to and invited to testify themselves. After all, the public policy influence of money in elections and the preemption of local laws by corporate entities legislatively and in the courts are increasing realities to local elected officials. Besides, it’s a fact that some local public officials become state officials and some of those state officials become our U.S. Senators and Representatives — building a relationship with them now increases the chances they’ll become champions to our cause later.

One more provision of the dozen MTA-driven ballot initiatives is worth noting. Following each public hearing, the municipality is required to summarize the testimony, send it to the appropriate federal and state elected officials and remind them that voters in their communities want the We the People Amendment to be passed. Sometimes, the summary is coupled with written copies of all the testimony presented. When the municipality hasn’t included the written testimony, local MTA organizers have sent it themselves to the relevant public officials.

This is certainly not the only strategy to make a national call for monetary reform locally relevant. But it is one way to educate the community and public officials, outreach to local groups, develop local leadership grounded in the issue, recruit new supporters and attract media attention. Oh, and by the way, it also sends a recurring message to elected officials that the people of the community en masse support authentic fundamental change.

Monetary policies that continue to enrich banking corporations that perpetually profit from the creation of money as debt and through subsidies and, when needed, bailouts, allow these financial entities to flex their political muscle through political campaign contributions (i.e. what some call “legalized bribery”).

Senator Dick Durbin stated in a moment of candor in 2009: “And the banks — hard to believe in a time when we’re facing a banking crisis that many of the banks created — are still the most powerful lobby on Capitol Hill. And they frankly own the place.” The Finance, Insurance and Real Estate (FIRE) remains “far and away the largest source of campaign contributions to federal candidates and parties”. This condition is a reflection of corporations both hijacking First Amendment “free speech” rights, which were intended exclusively for human beings, and the constitutional doctrine that “political money is free speech,” instead of what money actually is — property.

The power of the financial industry is also a function in what they can shield — namely their internal financial affairs — from public scrutiny. Like many business corporations, their defense from being transparent hinges on the corporate hijacking of Fourth Amendment Constitutional privacy rights, which again were rights originally intended solely for human beings. This has emboldened in the case of banking entities to claim without independent verification the need for greater financial subsidies and other support lest these increasingly “too big to fail” institutions, in fact, fail and risk pulling the entire economy into an abyss. Yet another instance of their increased power to influence public policies.

It should be noted that original public charters creating banks in many states mandated that the bank’s books be open to periodic public inspection. This ensured that banking corporations remained publicly accountable and subordinate in power to the public.

These current realities have created an outsized economic and political influence of financial corporations. In such a legal and political environment in which the fundamental constitutional ground rules are rigged to benefit the very rich and business corporations, there’s little chance of passage of monetary reform or, frankly, any solution that addresses fundamental change and/or reduces corporate power.

It also, quite frankly, makes it enormously difficult to pass the We the People Amendment. That’s why it’s essential that AFJM continues to work on passing one or more laws creating authentic monetary change and other organizations working on their respective agendas to change laws or regulations creating more justice in all their forms. Yet, it’s critical to understand the limitation of working exclusively to improve any condition legally if constitutionally the rules are stacked against us, rules that can and have time and again preempted democratically passed laws benefiting workers, consumers, the environment and the natural world.

It’s why AFJM and other groups need to devote some energy to changing the constitutional ground rules — to create a level political playing field where We the People can actually mean all the people working to pass authentic monetary change and create other laws and regulations to the benefit of all people and all living things.