Hale v. Henkel, probably one of the most cited cases (over 1,600 times), was decided by the United States Supreme Court on this day, in 1906.

As we all know, Corporations are not mentioned anywhere in the U.S. Constitution, but thanks to the rulings of activist Supreme Court Justices, Corporations hijacked the Constitution and Rights that were intended only for individuals. Hale v Henkel is a prime example.

In this case, the SCOTUS established the power of a federal grand jury engaged in an investigation into corporate misconduct to require the corporation in question to surrender its records.

"An order for the production of books and papers may constitute an unreasonable search and seizure within the Fourth Amendment. While a search ordinarily implies a quest by an officer of the law, and a seizure contemplates a forcible dispossession of the owner, still the substance of the offense is the compulsory production of private papers, whether under a search warrant or a subpoena duces tecum, against which the person, be [an] individual or corporation, is entitled to protection."

And thus, the Corporate hijacking of the 4th Amendment, which was intended to protect the individual's right to privacy, including protection against unreasonable searches and seizures without a warrant began. 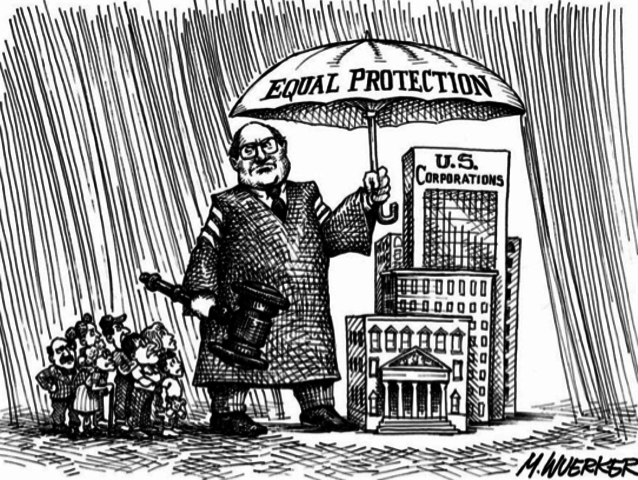 How does this affect you?

A subsequent ruling in Wilson v. United States (1911) built upon Hale v. Henkel by prohibiting corporate officers from invoking their own personal Fifth Amendment privilege against self-incrimination to justify a failure to turn over corporate documents.

This led to many circumstances in which corporations may exercise their right to "shut the door" on government inspectors who lack a search warrant. The resulting delay may be enough for a company to cover up signs of wrongdoing. Even if evidence is collected under a search warrant, there is no guarantee that it will hold up in court.

Such was the case when in 1997, the Environmental Protection Agency (EPA) received an anonymous tip from an employee of Riverdale Mills, a wire-mesh manufacturer that sits on the Blackstone River near Worcester, Mass. The employer claimed that the mill's wastewater treatment system was not working, and so the EPA agents got a search warrant to investigate and collected evidence which was later used by the government to indict Riverdale's owner on two counts of violating the Clean Water Act. But despite having a warrant and following the rules, the case fell apart after the judge handling the case threw out key evidence (water test results) because the EPA took samples on the mill property without informing the owner.

Like this, there are plenty of other similar examples where thanks to judicial decisions, commercial entities are granted privacy protections that thwart the governments' attempt to protect the public from a multitude of dangers by removing the advantage of surprise inspections allowing businesses to hide, alter or disguise dangerous conditions.

Not everyone was happy with granting corporations 4th Amendment rights, though. In his dissent in Hale v Henkel, Justice Harlan stated: "...the power of the government, by its representatives, to look into the books, records and papers of a corporation of its own creation, to ascertain whether that corporation has obeyed or is defying the law, will be greatly curtailed, if not destroyed."

What can we do?

Lack of an authentic democracy is due not only to corporate campaign donations (or investments) or domination of the media. We’ll never have democracy so long as corporations possess any inalienable constitutional rights, including never-intended 4th Amendment search and seizure privacy rights. That's why Move to Amend educates and organizes to abolish ALL corporate constitutional rights and hijacks. Please support our work. Inalienable rights are for human beings, not artificial legal creations of government and the We The People Amendment will establish that once and for all!

Learn how the corporate hijacking of this and other amendments harms you, your family, communities and the environment here.