If the Senate fails to convict Donald Trump for spreading falsehoods and inciting the deadly January 6th riots at the Capitol, we won't be surprised.

We have unfortunately grown accustomed to them not doing their jobs.

But that doesn't change the fact that it is critical that they convict him. Tell your Senators to act swiftly to convict Donald Trump before he leaves office.

Right now, as calls for "unity" and "we must move on" are meekly cried amid a devolving chaos in this brand new 117th Congress, multinational corporations have been able to position themselves as the "good guys" -- by aligning in their new opposition to Trump, divesting and breaking business ties from him and other politicians who were seen as instigators to the insurrection.

We don't know who needs to hear this, but multinational corporations are NOT our heroes. Political leadership is not the appropriate role for corporations, especially since they have been actively fomenting these violent and dangerous conditions for a long time, and up until very recently. 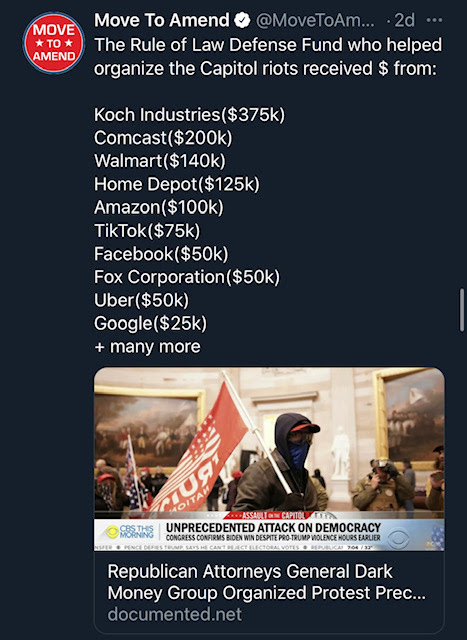 Trump has been openly violating the Constitution's anti-corruption laws throughout his entire presidency. When he repeatedly violated the Emoluments Clauses by using his position as president to benefit his own businesses and vice versa -- we heard nary a peep, much less any action, from Congress (nor the multinational corporations who are now suddenly turning on him).

We also don't believe impeaching or even convicting Trump is enough to address the festering open wounds of white supremacy. Not even close. The rise of the New Right (AKA open white supremacy and fascism) isn't going away -- and is currently developing new leaders and supporters as we speak. We may even see more armed insurrections in the coming weeks. And the status quo of corporate rule that relies on oppression, division and plundering is still very much alive. It's just now rebranded as "anti-Trump."

We demand that Congress do the bare minimum that their job demands, and impeach and convict President Donald Trump before his term ends. Contact your Senators right now and tell them!

And yes, the right wing's more militant social media organizing spaces are finally being rooted out -- and that's a good thing. But we also want to talk about the dangers of relying on Big Tech to "stop fascism." Spoiler: they won't, and only democratizing the industry will. Stay tuned as we bring more nuanced analysis on the dangerous role of tech and the media in an upcoming op-ed.

Until then, let's convict him for his crimes!

P.S. Your Senators need to hear from you today! Click here to contact them and tell them to convict Donald Trump of high crimes and misdemeanors for inciting a deadly insurrection at the U.S. Capitol on January 6!