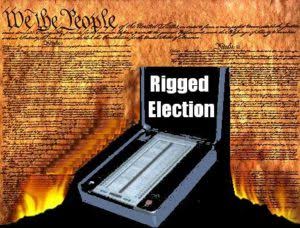 The 2020 election won't be postponed or cancelled. But it CAN be sabotaged and stolen. MoveToAmend's goal is to end Corporate Rule & to create real democracy. Corporate Rule is linked to elections by private/corporate controlled electronic voting machines which sometimes (1) have no paper trail (2) “flip” or change votes, and (3) don’t use "open source” or transparent  programming.

Fitrakis and Wasserman have written 7 books on elections, including their latest: "The Strip & Flip Disaster of America's Stolen Elections" (2017). They've co-authored hundreds of articles exposing the election fraud of Ohio"s 2004 election and subsequent elections all over the country.

Wasserman has taught history, cultural diversity, globalization and journalism at Columbus State Community College, Capital University & Hampshire College.  He holds an MA in US History from the University of Chicago and a BA from the University of  Michigan. He is a life-long activist, teacher, radio host and author or co-author of a dozen books including "SOLARTOPIAN! Our Green-Powered Earth"; and Harvey Wasserman's "History of the US".  With wind pioneer Dan Juhl, Harvey co-authored Harvesting Wind Energy as a Cash Crop: A Guide to Community-Owned Wind Farming (www.danmar.us). He is the senior Editor the Free Press, freepress.org