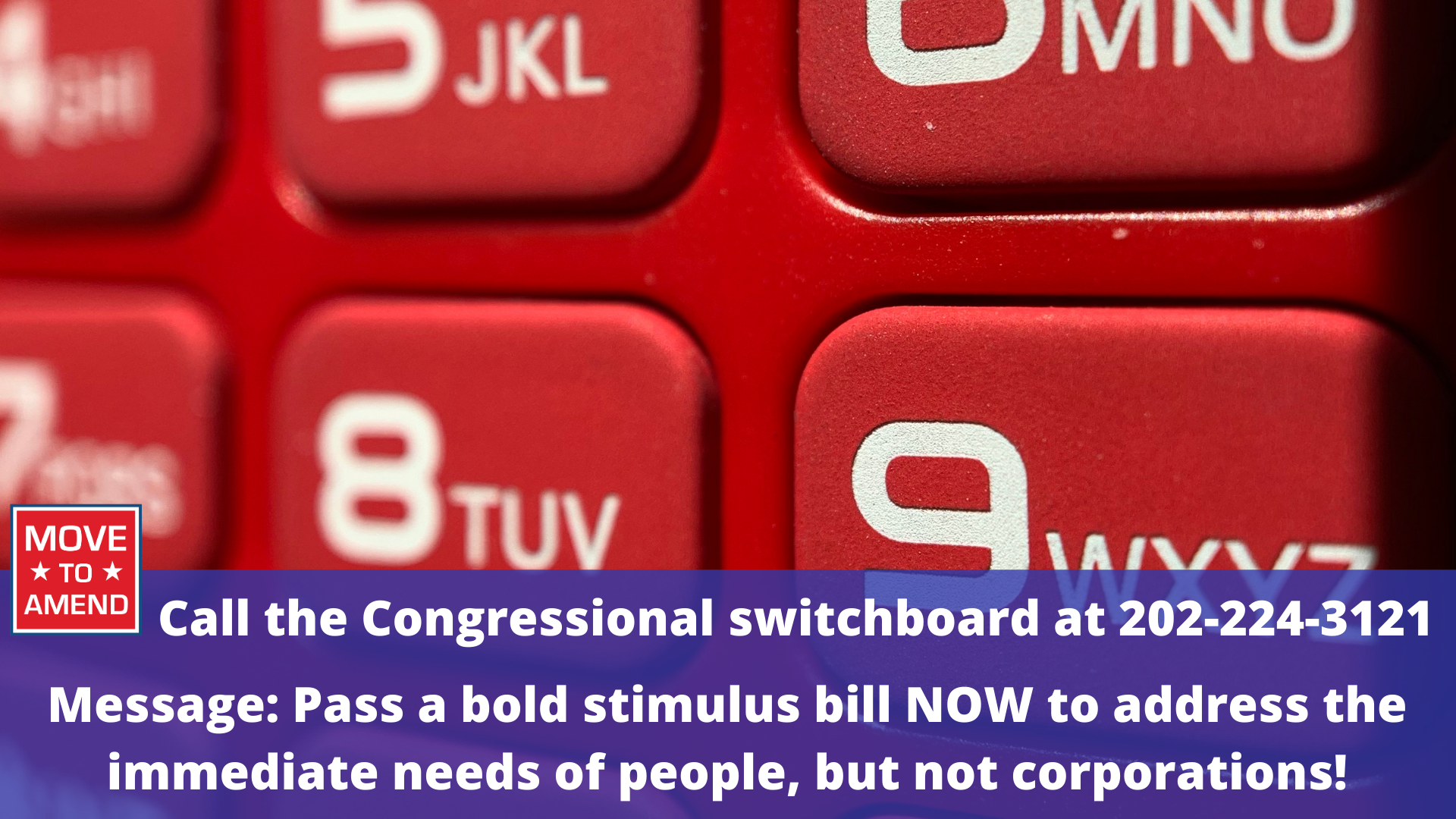 Message: Pass a bold stimulus bill NOW to address the immediate needs of people, but not corporations.

The end of the year marks the end of what’s left of what was never adequate support to tens of millions of people who’ve suffered from the pandemic, which has now claimed more than 265,000 lives in the U.S.

Your Senators need to be inundated with calls demanding that they immediately pass legislation which goes beyond the $2.2 trillion HEROES Act passed by the U.S. House of Representatives in May.

The degree of pain and hardship currently faced by people across the country is beyond inexcusable and immoral...with people of color disproportionately harmed.

Not everyone (the mega rich) or everything (major corporations, which are things, not persons)  has suffered during the pandemic. They’ve obscenely profited.

Many federal government assistance programs expire at the end of 2020. Tens of millions of people will face even greater food, income, housing and other hardships.

The Senate has yet to take any meaningful action. Why? For one, the 100 U.S. Senators have a median net worth of $1.8 million. This makes it very hard for them to relate to the lives of ordinary people, especially those most in need. Another reason is that Mitch McConnell and the GOP are demanding a five-year corporate “liability shield” included in any relief bill. This would protect many types of businesses from lawsuits their actions may cause. Since businesses are already legally protected from lawsuits if they act reasonably, the immunity demand is, instead, legal armour for businesses that cut corners -- risking the safety of consumers, workers and suppliers to further increase profits.

The political power of corporations, including the corporate constitutional “right” to donate or invest money in political campaigns, as well as lobbying Senators, is ultimately what’s driving the “liability shield” proposal -- a sickening means to avoid being held accountable to us, We the People.

Some economists are calling for a $3 trillion debt-financed stimulus package that includes expanded nutrition assistance, greater unemployment benefits, enlarged fiscal aid to state and local governments, and many enhancements to other safety net programs. People living in poverty, according to a new survey, support a "bold policy agenda for government to make work pay and ensure that everyone has high-quality, affordable healthcare, housing, and food."

That includes our Senators.

Contact your two Senators today at 202-224-3121. Demand that they pass a bold stimulus bill NOW to address the immediate needs of people, but not corporations, minus any corporate liability shield.

And while you’re at it, tell them this is just one of thousands of reasons why we need to abolish corporate constitutional rights, as addressed in our We the People Amendment (HJR 48), which they should agree to introduce in the Senate.

P.S. Please call the Congressional switchboard at 202-224-3121 and tell your Senators to pass a stimulus NOW to provide relief to people not a transfer of public wealth to corporations and billionaires. Find your Senators here.