It was a David and Goliath moment in the labor movement. Last week, 2,654 workers in a Staten Island Amazon warehouse voted to form an independent union -- a 100% local and grassroots effort led and powered by the workers themselves, resulting in the first unionized warehouse in the largest online retailer in the world.

And what we've been seeing with the Starbucks union wave, which shows no sign of stopping, we don't expect it to be the last. 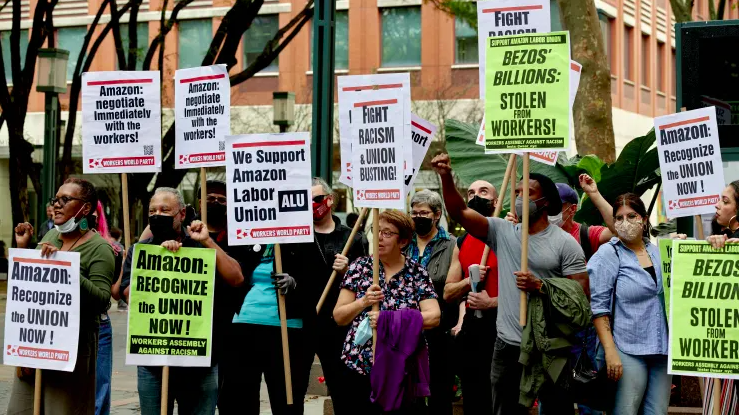 This win is historic not only because it was achieved locally and independently -- it is historic because historic amounts of money were spent by Amazon to stop it. An unprecedented $4.3million in 2021 alone was spent on anti-union consultants as part of their campaign to beat back worker organizing within the company.

And this is where money in politics gets...messy. Because the firm that Amazon hired to create and disseminate their union-busting materials, Global Strategy Group, has historically contracted with Democratic Party campaigns -- including Biden's 2020 presidential campaign. White House Press Secretary Jen Psaki was formerly Senior Vice President of the firm.

Yes, the same group that contracts with Amazon and Uber to crush unions, also advertises itself as “the leading polling partner for national Democratic party committees and PACs.”

Examples like this -- of the deep conflicts of interest inherent in a political system dictated by corporations and moneyed interests -- show us that we can't rely on this system to reform itself. We can't vote our way out of it. We must continue to build the grassroots movement that leads by example -- we will never sell out or compromise our values as we work to pass the #WeThePeopleAmendment.

This movement is 100% powered by regular people giving and doing what they can -- please consider making a donation today to support this work (and if you already give -- THANK YOU!)

It is important to point out that Amazon's union-busting campaign was deeply racist and classist from the start. After retaliating against Staten Island warehouse worker Christian Smalls, the young Black man who first organized workers to demand safer working conditions at the beginning of the pandemic, by firing him -- leaked memos revealed that executives called Smalls “not smart or articulate” as they planned their PR strategy to make him “the face of the entire union/organizing movement.”

What we are learning is that their dirty, craven tactics just aren't working like they used to. They can spend millions trying to smear us. But when we organize, we win.

And just like the Amazon Labor Union -- a group of regular people who successfully organized to bring a powerful behemoth like Amazon to heel -- so can we!

But it will take everyone doing what they can. Everything we have accomplished thus far -- the many hundreds of local and state resolutions and successful ballot measures passed, the 90 cosponsors in Congress, the nearly 500,000 petition signatures gathered -- this was all accomplished by dedicated volunteers and groups on the ground, supported by a small national staff, funded *only* by regular people giving an average donation of $40.

Move to Amend will always stand in full solidarity with workers fighting for a living wage, safety, dignity and rest and will do all that we can to support this revitalized labor movement to spread into every single corner of every single industry...until we finally win.