For ten years, Move to Amend has been organizing communities across the political spectrum to pass local and state resolutions and initiatives and lobby elected officials to advocate for their 28th amendment to the U.S. Constitution, the We The People Amendment.

The amendment, House Joint Resolution 48 is sponsored by Washington Representative Pramila Jayapal. It abolishes constitutional rights for corporations and money as protected political speech. Jayapal is joined by 67 colleagues in the House of Representatives in co-sponsoring the measure. The We The People Amendment is expected to be introduced in the Senate early this year. 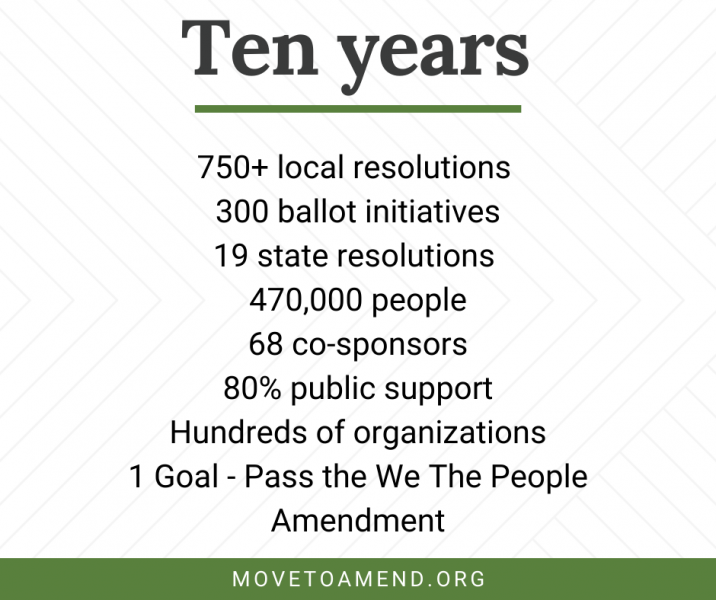 The success of the We The People Amendment is due to the work of grassroots volunteers educating and organizing their communities through a variety of campaigns and direct actions like the ones coordinated today. Activists organized sit-ins, rallies, film screenings, and lobby meetings with representatives who have yet to co-sponsor the We The People Amendment in the second wave of escalations since August. Organizers say they will continue to turn up the heat demanding action against corporate rule.

Jessica Munger, the Move to Amend Coalition’s Program Director said about the actions, "It’s time our representatives make it clear, bold, and brave - are they on the side of We The People, or billionaires and their corporations?"

Move to Amend is training organizers for mass civil disobedience this spring and organizers say they’re ready to take risks to let their representatives know they’ve had enough of unchecked corporate power impeding solutions to climate change, healthcare, and other important issues.