In order to effect social change, an advocate needs to be aware of the political and social power structures in play. A power map is a useful visual tool for figuring out who you need to influence, how to influence them, and who can do the influencing in order to reach a specific goal. This guide will help you create your own power map for your area.

Before you Power Map

Which elected officials are you going to focus on? Who is the key decision maker here? Map around a person or institution who can solve a problem. For Pledge to Amend, it’s going to be an elected official.

2. Map Influence of your Target

Once you’ve identified who you want to target, you can start writing down people or institutions who you think might be able to influence him/her, and their other associations. An easy way to get started is to look at your elected official’s major donors. From there you can plot out influential constituents and other groups he/she may have interacted with.

Find out everything you can about your elected officials, including the committees they serve on, their past voting records, their individual ideologies, political connections, campaign contributors, which staff people they rely on the most, what their hobbies are, etc. Use these to connect them to other actors in the field.

Some other ideas for mapping your target:

You don’t want to rule out anything right off the bat. So even if you know you don’t want to approach a certain group your target is connected to, map it anyway. You never know where it might lead.

It’s also helpful to map out any organization (and people related to these organizations) that might work on this issue as well. For example, if your goal is to get better conditions for workers, it’s a good idea to put down labor unions, even if they’re not directly connected to your target.

Connect these in a visual map.

Many of the groups you map out will have connections to each other, not just to your elected official. You may notice that one group or actor connects to many other influencers; this is called a “node of power.” Even if a node of power doesn’t connect directly to your target, it may still be useful depending on who it’s connected to and how many connections it has.

Analyze the map. You want to focus on the actors with the most connections or that are most significant to your target. Highlight these nodes of power and start thinking of a strategy to approach them. It may be helpful to your strategizing process to grow your map by expanding on these nodes. Don’t worry if it gets a little messy!

5. Draw a grid to plot influence and helpfulness

To figure out which of your target’s influencers can be the most helpful, plot them on a grid like the one below: This is an easy way to asses who will be most supportive, and influential. 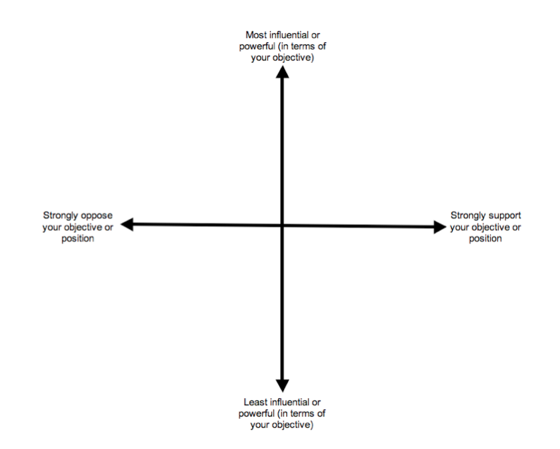 Now that you have a map of your target’s relationships, you can move on to the rest of the strategizing process.

For the Pledge to Amend campaign, you’re going to want a power map geared specifically towards influencing your elected officials. We’ve put together a handy sample power map for you.

In this case, it looks like many of Rep. Smith’s influencers have connections to his church. So a good way to build support for your cause, and get through to Rep. Smith, might be to reach out to his pastor or to hold an event in the church.

There are many ways to go about power mapping and plotting influential relationships, so be creative. Remember, the key to advocacy and effecting positive social change is personal relationships!

[2] Other guides to power mapping can be found at the following websites: