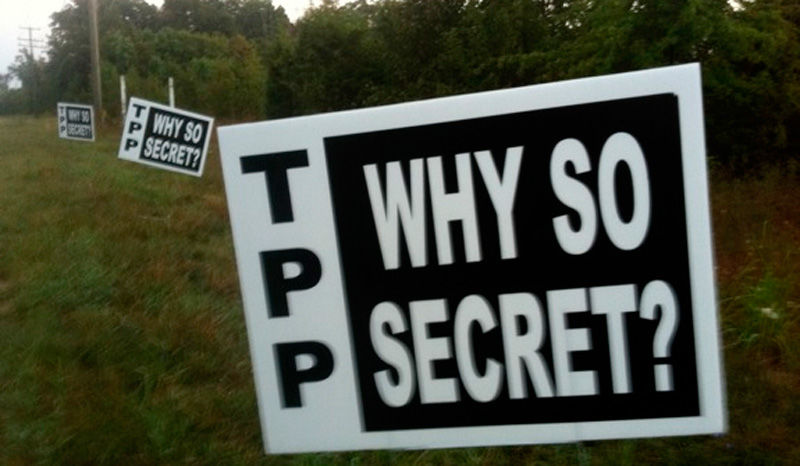 Like the dozen trade agreements the United States has previously entered and those under present negotiation, it has little to do with protecting workers or ensuring fair trade and  a lot to do with de-regulation and extending corporate power over democratic governance. These “agreements” directly threaten the laws that nations, states or local governments enact to address threats to the environment, food safety, human health, and worker protections.

This pact, written in secret over the course of seven years by 500 official U.S. corporate trade advisers, is running into trouble, however.  According to columnist Jim Hightower: “The basic problem facing the corporate and political powers that want you and me to swallow their TPP deal is that they can’t make chicken salad out of chicken manure.”

Free traders have told us for more than twenty years that these agreements open up foreign markets to American goods and create jobs galore in the United States.  But increasingly people ask: Are those markets not currently being supplied by local manufacturers and companies?  Won’t our own markets be opened to foreign corporations? Haven’t we lost millions of jobs since these trade deals arrived on the scene with 1992’s NAFTA?  Isn’t it the case that we have, for years, imported much more than we exported leaving us with worrisome trade deficits?

The Peterson Institute for International Economics (funded by major global corporations including many that helped write the trade document) tells us the TPP will raise U.S. incomes by $133 billion a year.1 It doesn’t reveal how that income will be distributed. But U.S. workers know the answer.

In addition to the predatory economics, the TPP subordinates our laws to global corporate control.  The TPP includes corporate-serving trade rules that override national laws passed to protect the public interest; which will in effect undo the sovereignty of governments.  The content of some of those proposed rules according to the Program on Corporations, Law and Democracy would:

The most savage assault on people’s sovereignty is found in Chapter 28 – the Investor-State Dispute Settlement (ISDS) process. This gives foreign corporations rights to sue a country if its laws would diminish anticipated profits. The judicial proceeding takes place in secret, before a tribunal of corporate lawyers and the decision cannot be appealed.
To illustrate the clout trade tribunals wield, here are examples of suits brought or laws shelved due to the corporate authority in trade accords:

--- A Canadian company, Gabriel Resources, filed a $2.56 billion claim in a World Bank trade court against Romania after that country rejected a gold mine that would use vast amounts of cyanide and level four mountains in a historic area of western Transylvania.3

--- A U.S. company, Bilcon, won $300 million in damages from Canada because it denied permits for a quarry expansion on the Bay of Fundy out of concern for whale migratory routes and “core community values.”4 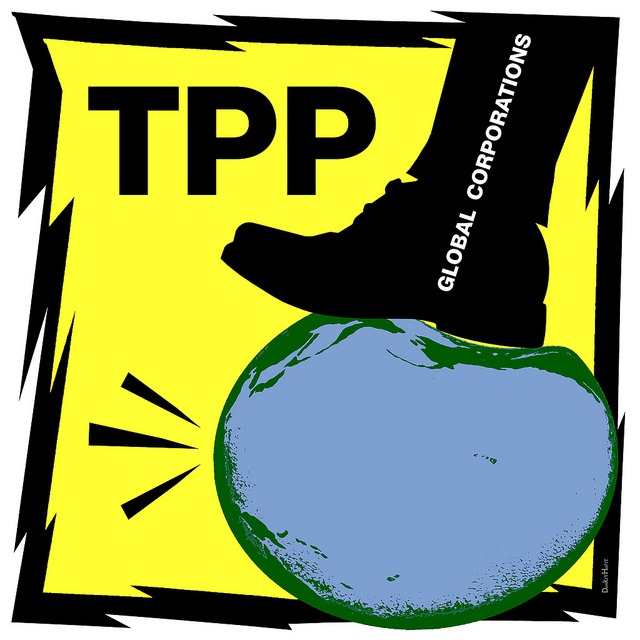 On April 1st the White House notified Congress that the TPP would not allow “Buy America” policies. No longer can we use taxpayer funds to give preference to U.S. companies that create jobs for our workers.5

Trade tribunals have awarded $3.6 billion to foreign investors through such investor-state provisions. The organization, Public Citizen, estimates there are about 9,000 foreign-owned firms in the U.S. that could sue the U.S. government for loss of future profits.

A free trade zone is a forced trade zone – against the will of people or governments. These actions put profiteering corporations in the category of sovereign nations. Even the threat of a suit prevents legislators from enacting laws that might run counter to the corporate bottom-line.

In the words of David Kay Johnston: “The value of corporations lies in encouraging risk-taking, managing assets owned by groups of people and in conducting business efficiently. But corporations have no place ruling over people or their governments… they must remain subject to state control, not the other was around.”6

I wonder if the readers of this article are pondering the same question as its authors?  Why is the Obama administration supporting the TPP?  Your answer is every bit as good as ours.