Drug prices are one of those unpredictable items in anyone's budget. The sudden, often eye-popping increases in prescription drug costs, along with erratic adjustments delivered by health insurance corporations and shifting pharmacy company policies can leave at least 25% of American families cutting back on medical care. 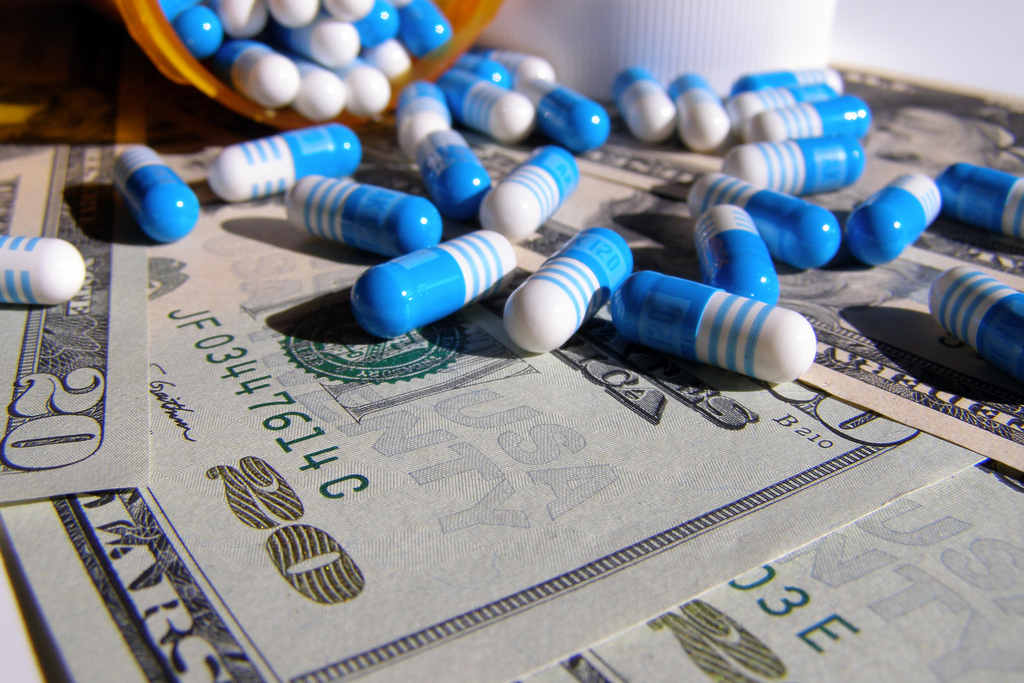 Last spring Bayer Corporation raised the price of its cancer drug, Nexavar, by 8%, bringing the monthly bill to $19,000. A month's supply of Novartis Corporation's blood treatment drug, Promanta, now costs $4,562 following hikes of 2.8% and then of 8.8% in  2018. Amgen, the maker of the leukemia drug Blincyto, charges $173,000 for a single treatment.

States are trying to apply the brakes on this pricing trend that is well above current inflation rates of less than 3%. By late summer 2018, 27 states had passed legislation to limit such industry practices after the federal administration utterly failed to follow through on a promise to bring "massive" price cuts by putting great pressure on corporate manufacturers to voluntarily drop prices. These state initiatives are a major priority for Medicaid officials who administer a program that serves more than 70 million people.

But states face a big problem in writing laws that cannot be legally and successfully challenged by corporations. The corporate institution is a legal form that, wrongly and disastrously, was given the status of a “person” with constitutional rights, courtesy of a number of Supreme Court decisions over nearly 200 years. From the standpoint of people’s self-governance, of real democracy, and perhaps any kind of survivable future for humankind, people’s legal subordinance to corporations must end.

A movement is building across the nation to rewrite this corporate story, to put people in charge as originally intended by our Constitution. This goal is being pursued by people in communities around the country with the deep leadership, organizing and outreach work of Move to Amend (MTA), a grassroots initiative committed to driving real democracy into our lives and Constitution. If we are to be citizens rather than corporate subjects it is necessary that we put these institutions under the authority of and in service to the people.

The state of Nevada's 2017 drug transparency law relating to diabetes medications required that price increases and the reasons for them be made public, along with production and marketing costs and profits from sales. In no time the state was sued by industry lobbyists claiming violation of their proprietary (trade secrets/private property) rights. The impasse was broken when the state agreed that drug companies could report price changes to its health department rather than the general public.

A Connecticut law mandates that insurers identify their 25 highest-cost drugs and the 25 with the highest price increase when submitting yearly rate requests to the state Insurance Department. Utah's Health Department is seeking ways to obtain prescription drugs from Canada. In Maine a new law encourages cheaper copies of drugs by requiring brand name manufacturers to give samples to generic drug companies. These state efforts are likely to arrive on the legal chopping block as corporations prepare their cases for the court.

Maryland tried to put an end to price-gouging after huge boosts were levied on a number of generic drugs. They imposed a fine of $10,000 and required refunds to purchasers. In no time the generic drug lobby filed suit and the Fourth Circuit Court of Appeals in Virginia invalidated the law as an interference with the Constitution’s interstate commerce clause.  The court’s two to one majority said the law would impact prices well beyond the borders of Maryland.  The dissenting judge claimed the state should have a right to protect its citizens and the court should not favor the drug companies’ position of being “constitutionally entitled to impose conscience-shocking price increases.”

Louisiana's lawmakers, believing their state's doctors should know the costs of prescriptions they write, proposed legislation requiring drug company representatives to reveal the price of drugs they promote. In a heartbeat drug company lobbyists poured into the state capital threatening to "bring everything against these bills." And that's exactly what happened. The powerful trade group, Pharmaceutical Research and Manufacturers of America (PHARMA) shoveled more money to LA legislators than any other state in 2016, hired one lobbyist for every two legislators, and spent lavishly entertaining at Baton Rouge's most expensive dining spots.

The pharmaceutical corporations poured out more than $100 million to crush California’s ballot initiative that would have capped state prescription drug prices at the figure paid by the Department of Veterans Affairs. A similar measure in Ohio was nixed with a layout of $50 million.

California's current law calls for advance notice and explanations of price increases as well as requiring insurers report the percent of premiums due to drug costs. It was passed despite the pharmaceutical giants enlisting 45 lobbying firms against it. Big PHARMA is now suing to block this CA law, holding that it is “unprecedented and unconstitutional,” violating its First Amendment rights by demanding it explain price increases to the public.

"Californians have a right to know why their medication costs are out of control, especially when pharmaceutical profits are soaring," said Governor Jerry Brown.

The Legal Basis for Corporate Backlash

Really? Corporations have a constitutional right to keep people in the dark? They can use the commerce clause to continue price-gouging? It’s nigh impossible to limit money in the political process because it was deemed equal to speech by the Supreme Court? Doesn’t that result in an electoral and policy-making system that’s akin to bribery?

Yes to all four questions, and there’s much more!

Indeed, pharmaceutical companies quickly rush to protest these laws with frenzied lobbying, generous political donations, mass advertising, and legal actions. The lawsuits are based on all manner of "rights" corporations wield against their creators, “We the People,” despite the Constitution’s intention that its rights and protections apply to natural persons only.

Corporations come at us with their claims to the Constitution’s private property protections. Corporations were originally public entities chartered in the states for public service, but a Supreme Court decision “found” them as private entities after which they increasingly fell beyond people’s control. This “property” came to include not only corporate assets and profits but also potential future profits, how labor is managed, the decision-making around products, services and technologies developed, and, of course, product formulas.  Everything’s a secret! Also, corporations have long hid behind the commerce clause of the Constitution which states that only Congress can regulate commerce among the states. That leaves states stymied in trying to curtail the production, consumption or transport of anything corporate within their borders, despite harms that people, communities or environments might be suffering.

The Constitution’s contracts clause leaves all governing jurisdictions unable to pass a law that “impairs the obligation” of contracts between private parties, sheltering most corporate contract-making from public power. And as we know,  Bill of Rights protections apply to corporate legal fictions deemed “persons” under law. They claim First Amendment rights to speak or not to speak, the right not to be effectively inspected because of 4th Amendment protections from search and seizure, the right to be compensated in accordance with the 5th Amendment when future profits are diminished by laws we pass to protect our environment, for example.  And they draw on the 14th Amendment for its equal protection (equal to persons, that is) and due process clause to prevent any governing jurisdiction from defining the nature and behavior of a corporation operating within it.

Pharmaceutical corporations certainly prove the urgency of Move to Amend’s purpose and work to achieve a 28th Amendment to the Constitution that would deny to corporations all constitutional rights, end the dangerous equivalency of money and speech, and help us as citizens develop the understanding and skills of doing democracy.

This community-based undertaking brings people together in a shared learning, activist and coalition-building program. It is supported and coordinated through a national staff, leadership board and long-term strategic plan that bring clarity, rigor and focus to its vital mission.