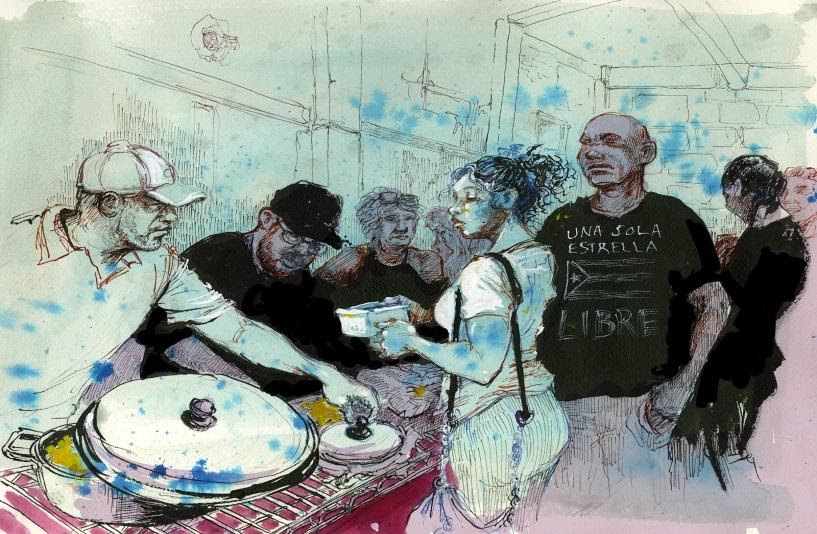 It’s been five months since Hurricane Maria ripped through Puerto Rico destroying more than 80% of structures in some communities, leaving most people without safe water, downing 85% of the island’s cellphone towers, and knocking out 80% of the island’s electric transmission lines. The Category 4 storm was the strongest to hit the island of 3.4 million U.S. citizens in 80 years.1

A month after the disaster President Trump congratulated himself on the level of federal response, saying “I would give myself a 10. I think we’ve done a really great job.”  Mayor Carmen Yulin Cruz of San Juan responded, “If it’s 10 out of 100, I agree, because it’s a failing grade.”2

There is wide agreement among many Puerto Rican activists and academics that economic and political powers on the island and in the United States have exploited the disaster, imposing “solutions” that would harm the public realm as they generate private profits and permit corporate cronyism to run amok.

Early evidence of this exploitation was the selection of a three-employee company from Whitefish, Montana, the home town of Interior Secretary Ryan Zinke, to repair the island’s electrical grid. A copy of the Whitefish Energy Company contract, published online by USA Today, provided glaring proof:

“…in no event shall the Puerto Rican Electric Power Authority (PREPA), the Commonwealth of Puerto Rico, the FEMA administrator, the Comptroller General of the United States, or any of their authorized representatives have the right to audit or review the cost and profit elements of the labor rates specified" in the contract.”

Additionally, the government had to waive any claim against the company related to completion dates.3

These arrangements brought an outcry and the contract was cancelled.

Naomi Klein, in her 2007 book “The Shock Doctrine: The Rise of Disaster Capitalism,” made the case that disasters, both natural and human-made, are commonly exploited “by for-profit corporations and so-called free-market ideologues to reshape vast swaths of impacted societies, undermining social welfare systems, privatizing public utilities, busting unions, and making obscene profits rebuilding.”2, 3

The idea of “disaster capitalism” is built on the theory that unpopular agendas are most easily promoted when political and economic elites declare a state of emergency, freeing them to pursue unconstrained corporate interests. Such exploitation is underway in Puerto Rico, a U.S. territory that declared bankruptcy in May 2017 in order to restructure a $70 billion debt.

When asked in New York why corporations should invest in the electricity authority, Governor Rosello said: “Well, there's a lot of space for making profits because the Puerto Rican people are used to paying high prices for energy. …You may lower the cost of production of energy, leave the price very high and the gap will be yours.”4

As of mid-February nearly 250,000 Puerto Ricans are still without power and work will not continue until the companies, subcontracted by the Army Corps of Engineers, arrive from the mainland.4

The hurricane also devastated the island’s public school system.  One-third of the 1,100 schools are without power, have leaky roofs and unreliable Internet connection.  Over 20,000 students (one in 13) have left the island. This besieged state left the schools vulnerable to privatization and the loss of democratic control, a step recently taken by the Governor in his proposal to shift management to private charter school operators and establish a voucher program.

“It is important to remember that what we have right now is extreme ‘climate injustice,’” said Klein on a recent trip to the island.  She was seeking responses to this climate calamity that would be fair to “the poorest people—who have done the least to create the crisis.”5

Puerto Ricans have an opportunity to establish new and more sustainable systems for public infrastructure and institutions. But they will not accomplish these goals as long as privatization by corporate colonizers continues to deny the sovereign rights of the people.

It will require a nationwide movement to put people in charge of corporations by denying their present, illegitimate authority to govern. Join over 400,000 people calling for a 28th Amendment to end corporate rule by signing Move to Amend’s national petition at www.movetoamend.org/motion.