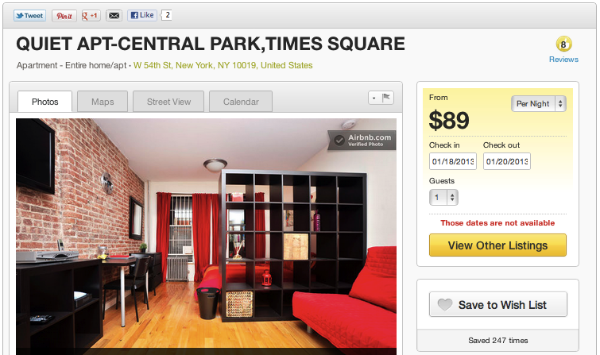 Most of us are drawn to the "shared economy" aspect of the Airbnb Corporation, the chance it offers to meet ordinary people living in ordinary places and to support the economic security of households in countries around the world.

But in a culture in which "more is better," even good things have a way of getting out-of-hand. In the last two years this corporation tripled its value to $30 billion. In New York State there are a total of 46,000 hosts with New York City being the company's largest market in the U.S. The only way to continue that growth is to expand the number of hosts.

New York City is the latest metropolitan area to rise-up against what it sees as Airbnb's assault on its law and communities. San Francisco, Santa Monica and Anaheim in California, along with the European cities of Barcelona, Berlin and Amsterdam are legally wrestling with Airbnb's corporate practices.

Recent New York State (NYS) legislation expands a 2010 law that made it illegal to rent more than one dwelling unit for less than 30 days if the owner is not a resident in the building. The expanded law makes it illegal to advertise a unit that's in violation of that restriction.

"The San Francisco-based company's money doesn't come from people living in their own homes renting out a room or a bed while they're there, which is legal," said the legislation's sponsor, NY Assemblywoman Linda Rosenthal. Instead, it's "people who have figured out they can take groups of apartments off of the market and turn them into their own private hotels," she said.

Airbnb Corporation immediately sued the NYS Attorney General and the City of New York claiming that the law violates its constitutional rights of free speech (First Amendment) and due process (14th Amendment).

The company's lawsuit maintains that the NYS law "is a content-based restriction on advertisements--in the form of rental listings--which are protected under the First Amendment." It also cites protections of the Communications Decency Act, a federal law holding websites not responsible for content posted by its users. The NY law had this federal statute in mind when it held hosts responsible with fines up to $7500 if found listing a barred rental on an internet platform such as Airbnb.

Airbnb Corporation makes the same constitutional claim in its lawsuit against the city of San Francisco. It is clear the corporation values its "right" to profit from these rentals more than it appreciates a community's right to protect its residents.

As these cases are battled in the courts, there are fundamental questions to be raised by us "self-governing" people:

1. Is a community not legally entitled to define and design its jurisdiction in keeping with the protection of all its residents and local economy?

2. Are the people not functioning legally when they pass laws through democratic process that define and limit corporate actions in their midst?

3. Why ought a corporation--simply a thing, a legal entity created by the people--be allowed to override such publicly-written, protective law?

The Constitution's rights apply to real people and not their inanimate corporate creations. We, as sovereign people, should deny the Airbnb Corporation's illegitimate rights in our communities and join the democratic work of taking away from all corporations those constitutional rights.

UPDATE: On Friday December 2, Airbnb Corporation withdrew its lawsuit against New York City. The city's law was written to hold hosts liable for advertising illegal apartments, not the corporation, itself.

"The city will now get down to the important business of enforcing the law against the serious lawbreakers on the site who turn affordable housing into illegal hotels. This is a win for everyone," said NYS Assemblywoman Rosenthal.