People of color are still far more likely to suffer from harmful air pollution than white people across the US and this disparity has barely improved in recent years, despite overall improvements in air quality, a new federal government-funded study has found. 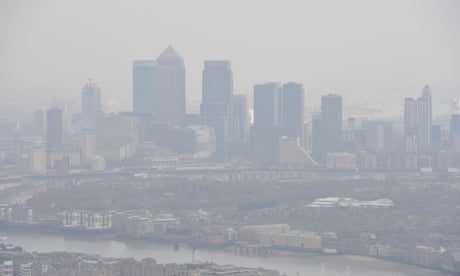 Exposure to nitrogen dioxide, NO2, a key transportation-related pollutant, is significantly influenced by race, far more than by income, age or education, the paper found.

While the racial imbalance in pollution impacts has long been noted by researchers and environmental justice campaigners, the study found that progress in addressing it has been sluggish.

The report comes as the Trump administration has outlined plans to dismantle the EPA’s office of environmental justice, which advocates for communities of color.

“What surprised us is that race matters more than income when it comes to who is breathing in NO2,” said Julian Marshall, UW professor of civil and environmental engineering and senior author of the study, published in Environmental Health Perspectives on Thursday.

“I just stared at these findings and thought: ‘What is going on?’ You would think places near highways would cost less. But it’s race that is driving this, not income. Urban planners tell us that cities are still really segregated – people live close to people who look like them. We are seeing the outcome of that.” 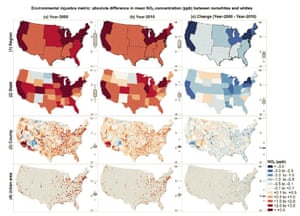 The study, funded in part by the Environmental Protection Agency, found that overall exposure to NO2 among all Americans dropped between 2000 and 2010. But black and Hispanic people experienced 37% higher exposures to the pollutant than white people in 2010 – only a slight decrease from the 40% gap in 2000.

In some parts of the country, the situation has actually become worse. In 2000, concentrations of NO2 in neighborhoods with the smallest proportions of white people were 2.5 times higher than in areas that are overwhelmingly white. In 2010, this discrepancy increased to 2.7 times higher. The gap between white and nonwhite people is starkest in the midwest and California.

NO2 is a nationally regulated pollutant that is emitted through the burning of fuel by cars, trucks and power plants. The pollution can make the air hazy and trigger a range of health problems, such as coughing, wheezing and infections, particularly in those with respiratory issues such as asthma.

According to the EPA, annual concentrations of NO2 have dropped across the US by 56% since 1990. But this overall improvement hasn’t wiped out the disproportionate impact suffered by black and Hispanic people, who have historically been housed nearer to major roads, industrial plants and other sources of pollutants than whites.

The University of Washington study estimated that if people of color breathed in the same level of NO2 as white people, about 5,000 premature deaths from heart disease would have been avoided in 2010.

“But the fact that there is a pervasive gap in exposure to NO2 by race – and that the relative gap was more or less preserved over a decade – is the bad news.”

Previous research has found that the very worst polluting sites are situated next to neighborhoods with high minority populations. The EPA has typically been reluctant to use the Civil Rights Act to prosecute polluters and help remedy this situation.