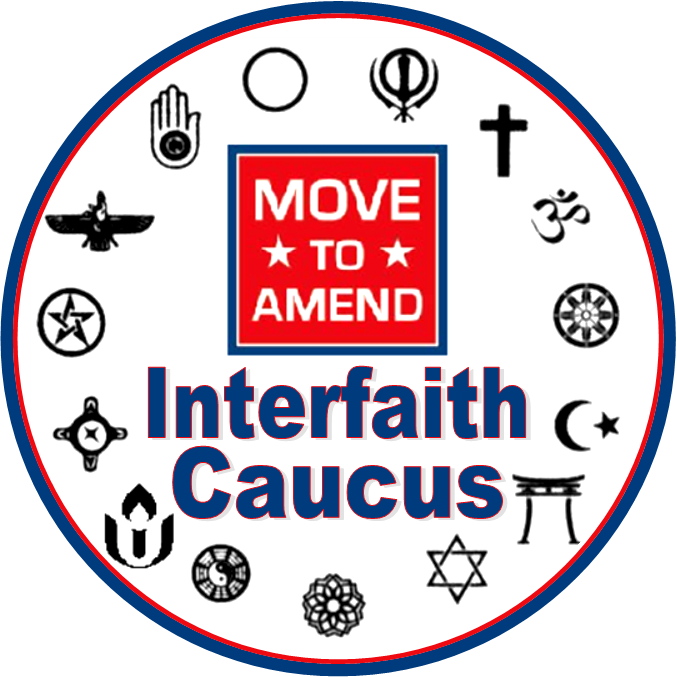 Because major religions agree they are stewards of creation, because climate change continues to advance unabated, and because it is detrimentally affecting our planet and each and every one of us creating a scenario of a bleak and tortuous future globally, culturally, socially, and economically…

THE PROBLEM: The acceleration of climate change continues unabated!

Attempts to impose restrictive regulations or legislation on emissions and other polluting activities have met with legal objections on the basis of a corporation’s “gifted” constitutional rights under the 5th and 14th amendments. As a result, courts have frequently ruled in favor of the corporation!

Communities of faith and ethical conviction alone have the influence and the cumulative power of numbers to mount an ethically-based demand to our government proposing and urging the passing of an amendment that reins in corporations; an amendment that restricts the power corporate donors have over legislators; and an amendment that ensures our laws and regulations will be ethically passed within the political process.

Communities of faith and ethical conviction exhibit many differences among themselves, some of which are strongly held, yet on the issue of responsibility as stewards of creation to act, there is unity and agreement.

Why can’t corporations be reined in?!

Our American independence was, to a great extent, achieved for the purpose of freeing the colonies from corporate domination (British East India Company and Crown Colonies –which were primarily setup to maximize profit for the King of England).

Only a constitutional amendment can undo decisions by the Supreme Court and return the rights to “We The People” alone.

o In today’s political environment the likelihood that such an amendment will be passed by Congress
via the normal political route is extremely low because politicians are controlled and benefit
politically by favoring the interests of corporations over those of the people.
o The alternative provided under Article V of the Constitution is that it takes 2/3 of the states to
request a convention to amend the Constitution. This is unlikely to happen and is fraught with
possible undesirable and unintended consequences.
o Only a concerted effort by the major national faith and ethical conviction communities working
together on many fronts has the likelihood of success!

The passage of an amendment to eliminate corporate constitutional rights and money as speech would have the following effect, both immediately and over time:

For Information or questions:

Organized Labor and Move to Amend

Organized labor has been critical in the struggles for social and economic justice in this country. We should be familiar with this history -- not because we want to schmooze or flatter -- but to make the case that support of Move To Amend and our “We the People” Amendment is part of that legacy. Below are four basic facts about the historic importance of organized labor.

1. Unions Gave Us The Weekend: In 1870, the average workweek for most Americans was 61 hours — almost double what most Americans work now. Yet in the late nineteenth century and the twentieth century, labor unions engaged in massive strikes in order to demand shorter workweeks so that Americans could be home with their loved ones instead of constantly toiling for their employers with no leisure time. By 1937, these labor actions created enough political momentum to pass the Fair Labor Standards Act, which helped create a federal framework for a shorter workweek that included room for leisure time.

2. Unions Helped End Child Labor: Union organizing and child labor reform were often intertwined in U.S. history, with organization’s like the National Consumers’ League and the National Child Labor Committee working together in the early 20th century to ban child labor. The very first American Federation of Labor (AFL) national convention passed, “a resolution calling on states to ban children under 14 from all gainful employment” in 1881, and soon after states across the country adopted similar recommendations, leading up to the 1938 Fair Labor Standards Act which regulated child labor on the federal level for the first time.

3. Unions Won Widespread Employer-Based Health Coverage: The rise of unions in the 1930’s and 1940’s led to the first great expansion of health care for all Americans, as labor unions banded workers together to negotiate for health coverage plans from employers. In 1942, the US set up a National War Labor Board. It had the power to set a cap on all wage increases. But it let employers circumvent the cap by offering “fringe benefits” – notably, health insurance.” By 1950, half of all companies with fewer than 250 workers and two-thirds of all companies with more than 250 workers offered health insurance of one kind or another.

4. Unions Spearheaded The Fight For The Family And Medical Leave Act: Labor unions like the AFL-CIO federation led the fight for this 1993 law, which “requires state agencies and private employers with more than 50 employees to provide up to 12 weeks of job-protected unpaid leave annually for workers to care for a newborn, newly adopted child, seriously ill family member or for the worker’s own illness.”

Organized Labor is Already Coming on Board with Several Endorsements

Lochner v. New York,  198 U.S. 45, (1905)  the U.S. Supreme Court held that a New York state law limiting work hours to 10 hours in a day and 60 hours in a week was an unconstitutional infringement of the corporate and individual liberty of contract as protected by the due process clause of the Fifth Amendment.

Adair v. United States, 208 U.S. 161 (1908) and Coppage v.Kansas, 236 U.S. 1 (1915)  the U.S. Supreme Court held that a federal law prohibiting employers from firing employees who joined a union was an unconstitutional infringement of the freedom of contract between employer and employee.

Adkins v. Children's Hospital of District of Columbia, 261 U.S. 525 (1923)  In Adkins, the U.S. Supreme Court held that federal minimum wage legislation for women and children was an unconstitutional infringement of the corporate and individual liberty of contract as protected by the due process clause of the Fifth Amendment.

Moorehead v. New York ex rel. Tepaldo, 298 U.S. 587  (1936)  In Moorehead, the U.S. Supreme Court reaffirmed Adkins and held that a state minimum wage law for women was an unconstitutional infringement of the corporate and individual liberty of contract as protected by the due process clause of the Fifth Amendment.

Harris vs. Quinn (2014) The Supreme Court held that that home health care workers in Illinois cannot be compelled to financially support a union if the employees find the union’s advocacy work distasteful—even if the union negotiates their contracts and represents them in grievances. Illinois is one of 26 states that require public-sector workers — such as firefighters, police officers and teachers — to pay partial dues, often known as “agency fees,” to the unions that represent them.