Posted by Jessica Munger 360pc on

The moment is ripe for change. A global pandemic has left unprecedented numbers of people without jobs, housing and healthcare. A swell of uprisings against police brutality have further exposed the deeply rooted white supremacy in our institutions. For over ten years, we have been facilitating conversations with People across the US about imagining what constitutional renewal could look like in this country. Now we're leveling up.

Join us for a two day, virtual, participatory process where we'll:

- Have participatory small group breakouts to identify the current moment, envision a better world, and begin planning for how to get there

- Synthesize our movement demands in a constitutional framework

- Be bold, visionary, revolutionary, and joyful

RSVP AND REGISTRATION INSTRUCTIONS AT THE BOTTOM OF THIS PAGE

What is a Peoples Movement Assembly?

The Peoples Movement Assembly is a participatory process which came to the US out of the World Social Forum, and has been used by many communities and assemblies for generations.

"The assembly is a constellation of social movement organizations and people that seek to govern themselves.
It is not a network, not a coalition, not an alliance, and not a political party. It is inclusive and not exclusive to one political line or ideology. It is a convergence of social forces.

The assembly process is based on the facilitation methodology of collective critical thinking and analysis, resulting in a synthesis that represents the sum organic total of all of the ideas and commitments. The social movement assembly results in action based on that synthesis.

The assembly is a decolonizing process. The assembly process is based on a theory of change that people can create processes that dismantle colonial and neocolonial systems while at the same time creating a new society.
At the heart of the assembly process is a project to dismantle patriarchy, racism, poverty, capitalism, oppression, exploitation, and violence while replacing those systems with movement governance and liberated institutions.
The assembly creates an open space for people to enter social movements and become active participants and leaders. The assembly is facilitated to encourage maximum participation in order to practice direct participatory democracy at the community level, within particular frontlines, and across social movements.

The assembly is multiracial, multigenerational, multi-ideological, and multi-gendered. The assembly brings all the voices together in a circular fashion and engages the thinking, experiences, and visions of all the participants in order to synthesize and collectively agree on action steps." - PeoplesMovementAssembly.org 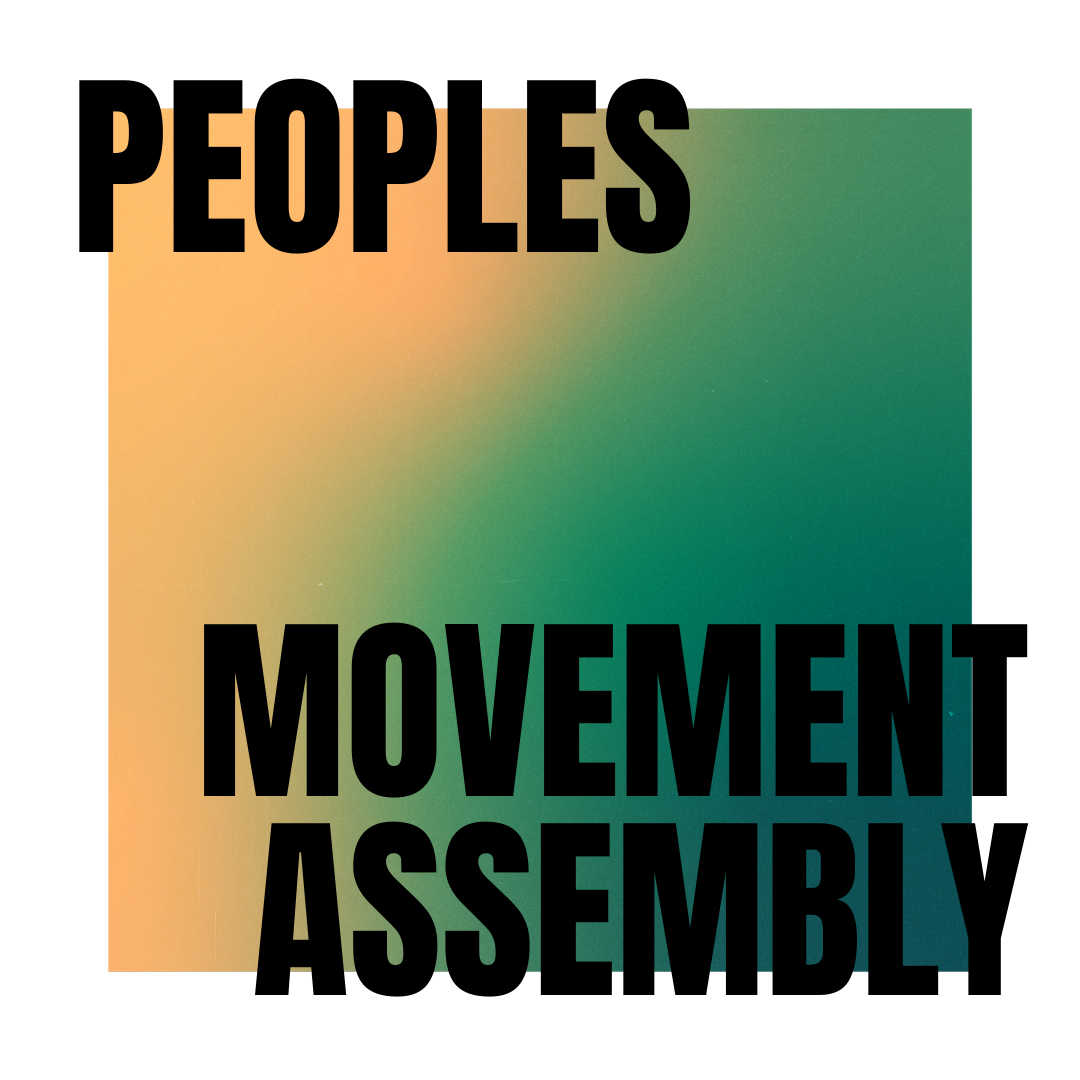 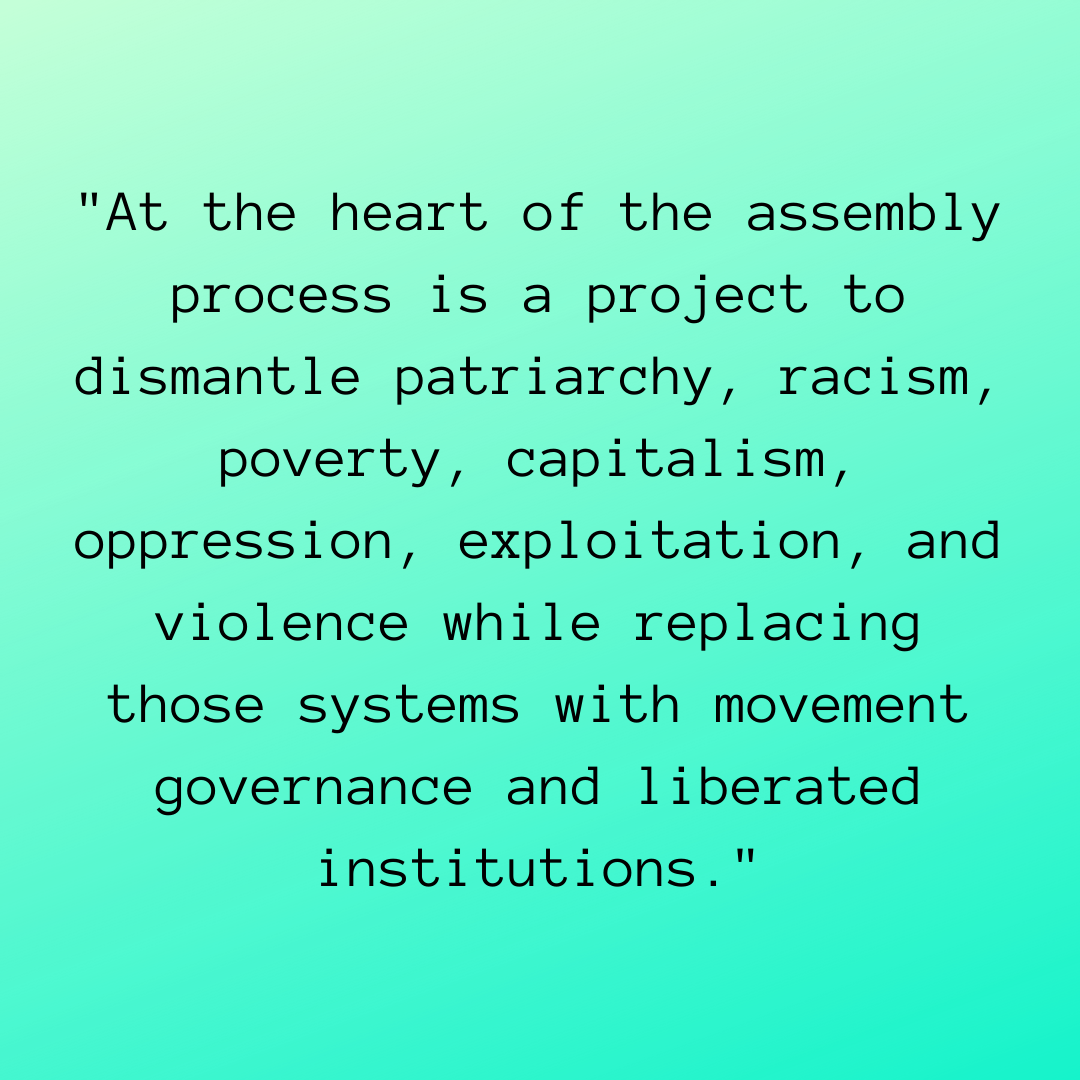 This People's Movement Assembly- Towards a Peoples Constitution is a process designed for those who are ready to imagine a better world and a constitution that protects People and Planet, not corporations and profit.

This is not a space to debate if we should renew the constitution, but rather, what's our vision for a Peoples Constitution. The following assumptions are the starting point for this PMA. Please join us if you are at least mostly in agreement with these assumptions.

- Community Environmental Legal Defense Fund
- A Radical Guide
- Liberty Tree
- The Pachamama Alliance
- Move to Amend
If your organization is interested in partnering, and to learn more about what that means, email [email protected]

PLEASE NOTE - THIS IS A TWO-STEP REGISTRATION PROCESS: Once you RSVP below, you'll receive an email directing you to register on zoom. You are not registered until you've done the second step.

*IF YOU NEED TRANSLATION FROM ENGLISH, OR HAVE ANY ACCESSIBILITY NEEDS, PLEASE EMAIL [email protected]*

Towards a Peoples Constitution!