During heavy winds in Northern California on October 8th and 9th of 2017 the “Wine Country Fires” began. They burned more than 245,000 acres, destroyed more than 8,700 structures and took the lives of more than 40 people.

Electric power lines can spark fires if they fall on parched timber. The state, presently under drought conditions, has plenty of such fuelwood. On the night of October 8th emergency calls came in from 10 different sites along Pacific Gas & Electric Corporation’s power lines.1 Investigations are underway by the California Department of Forestry and fire Protection (Cal Fire) to determine whether the power company’s wires caused the fires that displaced thousands.

Such disastrous events can often be credited to corporate negligence when profits are put above safety. California law requires that power lines be at least four feet away from branches. A “requirement” that PG&E Corporation prepare safety maps showing the location of power lines that pose fire hazards was delayed five times over the last ten years, delays approved by the regulatory agency, the California Public Utility Commission.2 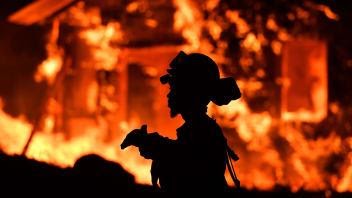 Disregard for safety is not new to the PG&E Corporation. In 2010 it was fined $1.6 billion for the San Bruno pipeline explosion which killed eight people. In 2011, the company was fined $38 million for installing a wrong pipe which caused an explosion.

In 2015 it was found responsible for the Butte fire which took 549 homes and two lives.  The fire was started by a tree falling into a power line and resulted in an $8.3 million fine and $1 billion in damage claims.3 In 2016 another fine of $37.3 million was imposed when the company accidentally broke a pipeline because it failed to maintain legally required records on pipeline location.

Following the Northern California fires, PG&E said that “hurricane strength” winds of more than 75 mph prompted these disastrous events. But weather stations in Santa Rosa and Napa areas measured 30 and 32 mph when the fires started, although the speeds later rose to about 45 mph.

With a history like this, why would a regulatory agency grant the company delay after delay?

Truth is, regulatory law is not democratic law committed to protecting and serving the people.  It is a kind of managerial law compatible with corporate agendas. The first regulatory agency, the Interstate Commerce Commission (ICC), was instigated by a pack of railroad barons in the late nineteenth century to quell a rioting public angry at the incidents of fires and worker deaths caused by rapidly expanding railroads. The ICC was established to make it appear that “We the People” could control corporate behavior in the interest of land and communities.4 But the regulations, standards and patterns of enforcement were heavily shaped by those same corporations in order to minimize any inconvenience to their own plans.

A similar relationship persists today. People and communities experiencing corporate assaults are invited to seek redress through regulatory avenues, but these victims are fighting defensively.  They begin the process very short on legal expertise, background information and funding when compared with their corporate adversaries. People’s triumphs are few and far between.

For example, consider the Federal Energy Regulatory Commission’s permit approval record for gas pipelines. According to an attorney and former FERC employee, only one pipeline was outright rejected by FERC in the past 10 years while nearly 150 were approved. The agency is viewed as a “rubber stamp machine,” despite many instances of informed, organized opposition by affected populations.5

Self-governing citizens should have authority to define their corporate creations rather than be subordinate to them as in our current regulatory system. Learn more about how law serves corporate power and puts these entities in charge of our so-called U.S. democracy. Join the work of Move to Amend. Check out our website at www.movetoamend.org and sign the national petition.